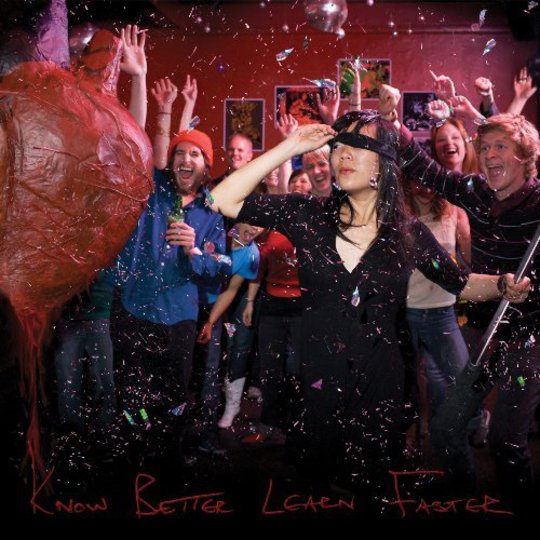 Chances are that Thao Nguyen stutters and mumbles her way through real life just like the rest of us. Hand her a guitar or a banjo, however, and she’s a butterfly collector of the emotions, seizing the most colourful, ragged scraps as they flutter past and deftly skewering them for posterity with the kind of sharp, glinting insights that most lesser mortals only come up with half an hour too late.

We Brave Bee Stings and All, from 2008, was a hymn to taking those first big gulps of air outside home in your early twenties, with the interstate bus and long-distance romance widening horizons beyond the backyards of suburban Virginia and her Vietnamese mother’s laundrette. If Thao was encouraging herself as much as the listener to finally take those stabilisers off the bike – “You’ve gotta push all the doubt to the side of your mouth” – then Know Better, Learn Faster deals with what happens after that first inevitable tumble.

Pictured on the album’s cover taking aim at a heart-shaped piñata, Thao once again sings in a way that conveys both breathless astonishment and world-weary wisdom. You might picture Feist’s wryly rhythmic way with a syllable, or Cat Power’s more pragmatic, perkily caffeinated younger sister. And even Chan Marshall might have trouble wallowing for long with The Get Down Stay Down backing her up. Adam Thompson (bass and guitar) and Willis Thompson (percussion) flesh out Thao’s bluegrass-inflected picking and tart, Carrie Brownstein-style guitar lines with breezy, no-nonsense strums and melodies that turn bar-room maudlin into honky-tonk knees-up, as though the only way to cure a bruised heart is to dance until your feet hurt more.

After opener ‘THE CLAP’ turns the dogged mantra “If this is how you want it, okay, okay” into a handclapping hoedown, it’s on with the business of brushing off the dirt and picking the grit out of the grazes. ‘When We Swam’ sways between a chorus of lingering lust (“Oh bring your hips to me”) with the acknowledgment that “When we swam our love to pieces / we washed up on messy beaches”. ‘Know Better Learn Faster’ sets Andrew Bird’s swooning violin and a cantering heartbeat of drums against sober realisation: “But I need you to be / Better than me / And you need me to do / Better than you”. Whilst ‘Body’ matches its increasingly desperate pleas – “What am I just a body in your bed? / Oh won’t you reach for the body in your bed?” – with a brass-assisted tumult that’s equal parts hysteria and shoulder-shrugging abandon.

Ironically, it’s this ever more bold and varied music that highlights the same weakness that marred We Brave Bee Stings and All, namely the fine line between overwhelming, instead of bolstering, Thao’s dry, spare (some might say limited) melodies. After tracks such as ‘Body’ seemingly invite the whole street around for a gawp between the sheets, it’s something of a relief when ‘The Give’ allows Thao room to more fully inhabit the ambiguous emotions of “an aimless man with places to go” over a low-key mix of fluid banjo picking and unsentimental strings. ‘But What of the Strangers’ also slips brutality past under cover of gentle instrumentation, musing “I kiss your ears with the truth / How could it hurt so hard”. If Thao were to apply the same wise-beyond-her-years judgement to the music as to her lyrics, however, by the time a successor to Know Better, Learn Faster rolls around she might have no need of her own advice.