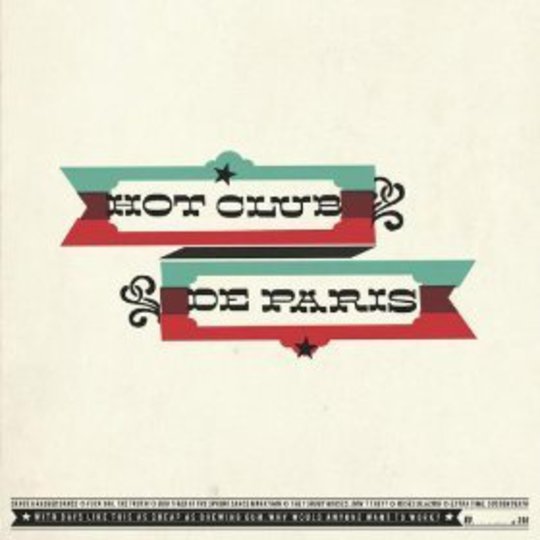 It would be easy to dismiss Hot Club de Paris’s love of wordplay and quirky time signatures as a distraction from their music, and perhaps in the past this may have been the case. Despite occasional flashes of brilliance, the trio’s output up until now has been very much representative of a band attempting to get comfortable in their own skin. On the oh-so-ironically titled With Days.... EP, however, the Liverpool boys exchange verbal jousting for a little more musical focus with their most streamlined offering yet.

Sure, there’s still echos of anything from the criminally underrated Jetplane Landing (circa Zero for Conduct) to The Jam via early Bloc Party, but there’s no denying a newfound sense of identity in tracks like ‘Dance a Ragged Dance’ and the all-too-brief ‘Noses Blazing’. Gone are the flirtations with afrobeat underpinning much of Live at Dead Lake, firmly buried in exchange for a more structured approach to songwriting with an emphasis on weaving guitar melodies, tighter vocals and solid production.

With the exception of ‘They Shoot Horses, Don’t They?’ – a jumble of ideas that never quite pulls together into a cohesive whole – the Smith brothers have delivered a selection of agreeable, upbeat songs exuding youthful energy and confidence. ‘Dance a Ragged Dance’ kicks things off, urging the listener to cut loose in “days filled with pretentious times”. Presumably a jibe at an overly-serious music scene that’s forgotten how to have fun, the track doubles as a defiant middle finger salute to early critics. Dextrous guitar lines interweave with chiming melodies, underpinning what appears to be a conscious effort on Paul Rafferty’s behalf to tighten up the vocals.

‘Fuck You, The Truth’ opens with a minute of ringing percussion before breaking down into a Bloc-party style workout – all angular rhythms and shouty narrative executed with undeniable vigour. ‘Dog Tired at the Spring Dance Marathon’ never really gets off the ground, more half-baked musical notion than fully realised song and the less said about the confused ‘They Shoot Horses...’ the better. Thankfully though, this faltering mid-section proves to be more a stumble than a tits-up, sprawled flat-on-your-face faux pas.

Despite a largely pleasing offering, it is evident that the band are still struggling with past demons. The stream-of-consciousness lyrics more often than not get in the way of the music, distracting the listener. However, where the band keep their collective eye on the ball such as the excellent ‘Noses Blazing’, it all comes together beautifully. Two minutes of lean, mean pop perfection, the track is arguably the best example yet of the group’s potential.

Minor niggles aside, With Days... EP clearly documents a group who’s confidence is growing exponentially with each successive release. These boys are clearly determined to make good on early signs of promise with a measure of optimism that’s difficult to resist. As the final bars of ‘Extra Time, Sudden Death’ draw to a close, one can’t help but wonder what might have been had they chosen to record a full-length album.