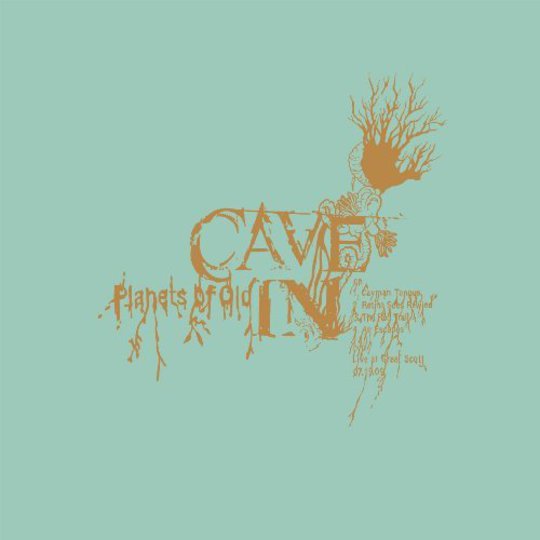 At some point in their ten-year history, Cave-In signed to a major label. It’s always interesting when a DIY band makes a move from the underground to the mainstream, always interesting to see how they’ll adapt to a new environment. With Cave-In, everything got a little more prog, a little less metal. They had a video with fairly heavy rotation on MTV2. It had a Big Rock Chorus on it. Things were looking good. Then they went back to their roots, started yelling a bit more, and put out a record on old label Hydrahead. Then they went on hiatus. Planets of Old is their first new material in four years. Now normally when a band makes a comeback record, they struggle to capture the energy or the charm of their early days; four years is a long time to wait to make a new record. Yet somehow Cave-In have managed to pick up where they left off. No hiccups, no nothing.

As a re-introduction to a band, ‘Cayman Tongue’ is pretty much perfect. Whilst their previous work has riffs, ‘Cayman Tongue’ has RIFFS. In fact it’s pretty much just one RIFF for about six minutes. One punishingly brutal riff, just churning away, slow and steady, with no let up, no give, just pure unadulterated aggression relentlessly pummelling away at you until you submit to the power of the riff.

The key to good hardcore is to be fast and to be loud. ‘Cayman Tongue’ fulfils the second criteria excellently, but it lacks a little pace. Second song ‘Retina Sees Rewind’ makes up for this – if the previous track had the feel of a slow moving train, ‘Retina Sees Rewind’ is a motorcycle race or a car chase; it’s frantic in a way that feels as if each instrument is trying to outrun the other, as if their life depends on them finishing first, on getting to the next song.

I’ve been trying to avoid using the phrase metalcore as it suggests Bring Me The Horizon, hair straighteners and girls' jeans more than it does, say, Rorschach and a genuine link to hardcore, but sometimes a name just sticks. ‘The Redtrail’ is a metalcore song through and through, but don’t let that put you off. Cave-In were/are contemporaries of Converge; they know what they’re doing. It’s fast and loud, like hardcore, but it’s also a kind of technical, and there’s a fair amount of yelling, just like in metal. Hence metalcore. See? Nothing to worry about. And not an autotuned vocal in sight.

Last song ‘Air Escapes’ fits somewhere nicely between the rest of the songs. It’s not as taxing, and provides a little breathing space for the listener, a nice gentle send off following the battering of the previous tracks. It’s a kin to the major label era Cave-In, with its prog metal bent and melodic vocals. Think of it as a post-coital cuddle at the end of a particularly aggressive workout. And that’s it. Four songs, 14 minutes. If this is what Cave-In are coming back with, I for one welcome them.