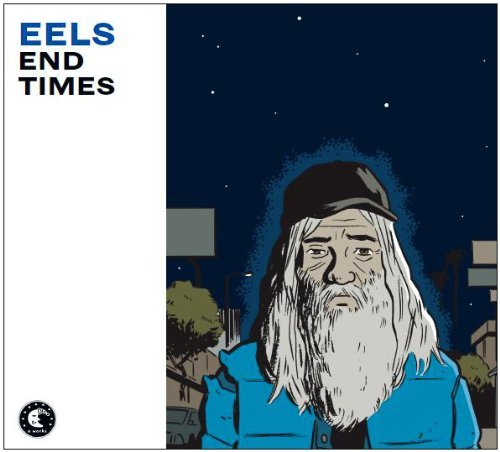 End Times is a break-up album that lashes relationship breakdown onto societal collapse, and rarely has Everett sounded so plaintive, so utterly broken down. Even Electro-Shock Blues, which dealt with the deaths of his mother and sister, had musically upbeat moments like ‘Cancer for the Cure’ and ‘Last Stop: This Town’. Blinking Lights and Other Revelations was full of them. On End Times they are fewer and farther between and even when Everett does harness that life-affirming energy, as on ‘Gone Man’, he can’t help but flip the classic Rolling Stones refrain “I used to love her, but it’s all over now” to the rather more lugubrious “She used to love me, but it’s over now”. »

limited edition with a bonus 5 track cd. the eighth eels studio album, 'end times', is the sound of an artist growing older in uncertain times. an artist who has lost his great love while struggling with his faith in an increasingly hostile world teetering on self-destruction. largely self-recorded on an old four track tape machine by eels leader mark oliver everett aka e in his los angeles basement, it's a 'divorce album' with a modern twist: the artist equates his personal loss with the world he lives in losing its integrity. when everett finds comfort 'in a dying world,' the end times he speaks of isn't about 'mayan calendar conspiracy theory bullshit,' he says, but, 'the state of the desperate times we live in. the bottom line-ness of it all. the end of common decency. the loss of caring about doing a good job. these are tough times. who can you trust? walter cronkite is just a ghost.' while the last eels album, 'hombre lobo' tackled the subject of desire, 'the before,the spark that ignites everything,' everett says, 'end times' is about the other side: the after.and while 'hombre lobo' was written from the point of view of a fictional character, end times is pure real life. brutally unblinking, 'end times' may be the elecro-shock blues of break-up albums. while the 1998 eels album 'electro-shock blues' dealt with the untimely deaths of everett's mother, father and sister, 'end times' takes a hard look at losing love.
description from www.roughtrade.com