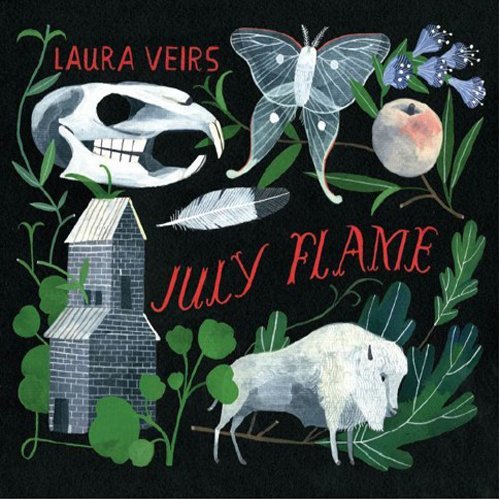 Stuck in the midst of winter, it's sometimes hard for us to see as far as its end. It must feel like a trudging schlep for record »

'july flame' explores the emotion of mid-summer. drenched in wood smoke, sunlight, pastoral dales, fireworks and warm nights, the lyrics explore the dichotomy between one's desire for permanence and security and the realisation that such things rarely exist. 'july flame' is a magical and flawless collection of songs, highlighting veirs' masterful finger picking guitar and confident vocals. "laura's like the queen bee and my ear is her hive; she nests and makes honey in the hairs of my cochlea," says jim james of my morning jacket (who sings on several tracks).
the album breaks from veirs' previous full-band efforts, although many of the same players make appearances on the album, including long-time collaborators karl blau and steve moore. string arrangements are featured more on this album than on others; the brilliant improviser eyvind kang plays viola on many songs and legendary arranger stephen barber composed hauntingly beautiful string quartet arrangements for three songs. 'july flame' is the sixth album that laura and producer tucker martine have made together. recorded and mixed at their home, the song-writing, arrangements, production and performances create a fully realized piece of art that inspires reflection and calm in a world that spins unsteady.
description from www.roughtrade.com