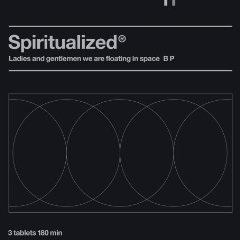 In October Spiritualized returned to their high water mark, and performed Ladies And Gentlemen We Are Floating In Space in full for four nights with the help of a string section, horn players, and backing vocals from the London Community Gospel Choir. These Don't Look Back shows are normally the sign of a desperate band. Spiritualized are not a desperate band.»

the album is re-released with new artwork in a unique pill pack style package and two cds of bonus content. these bonus tracks give a valuable insight into the artist's work-in-progress - and include demos, instrumental versions, and session mixes - and highlight an aim for perfection prior to recording the definitive version. it is now 12 years since 'ladies and gentlemen we are floating in space' made a profound impact in the summer of 1997, both critically and commercially, with its psychedelic soundscapes and heart-rending lyrics. it has influenced a whole range of musicians ever since. it was nme's album of the year for 1997 and reached number 4 in the official charts. originally packaged as a giant pill offering a written prescription, the concept was creatively inspired reflecting the depth of emotion and trauma laid bare on this truly remarkable work.
description from www.roughtrade.com