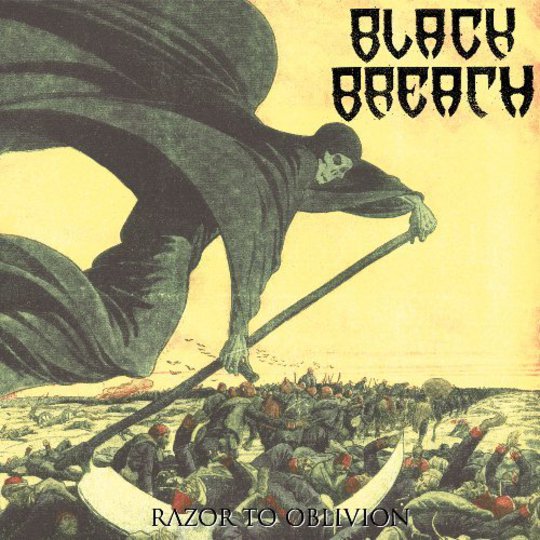 My fellow members of the ‘scrolling down before reading the review properly’ cru, and those of you with exceptionally large monitors, might have already clocked this bad boy’s mark out of ten and thought something like: 'okay, what’s up with some cheesily-named band I’ve never heard of getting a score that IN MY CONSIDERED OPINION should be reserved for important and canonical music of great emotional import like oh you know those guys I read about on this one blog and maybe those guys I did a blog post about and this band who should TOTALLY be on the soundtrack to the next Twilight movie and tell you what, here is a large space between some square brackets in which YOU can imagine sits a list of YOUR favourite important music of great emotional import released in 2009: (

). The reason is that the debut EP from Black Breath is 15 minutes of totally facemelting and to all intents and purposes perfect black-crusted hardcore heavy metal. If you thought the recent Converge album [http://drownedinsound.com/releases/14782/reviews/4138211] was as good as it gets this year for that kind of bizniz, Razor To Oblivion is exactly ten percent better, as the respective scores ably demonstrate. To the best of my knowledge, the only thing that might have topped it in '09 in the stakes of triumphantly unfuckwithable riff warfare is The Sleeping Eye by Iron Age, but I’m all ears if you have recommendations. Anyway, Black Breath: they’re from Seattle, there’s five of them, they’re probably named after a track by proto-death metallists Repulsion and Razor… was originally released on their own label in 2008 as a 12-inch before Southern Lord got wind of it and cashed in on true underground talent for financial gain, by which I mean they did the entirely noble and commendable thing of rereleasing this on CD so it could be heard by the billion-strong audience it deserves to have.

The four tracks on the disc give the distinct impression that Black Breath’s two guitarists and one bassist get up each morning and, half an hour later, have written three career-enablingly killer riffs while waiting for their coffee to brew. The title track, which opens the EP, starts off like it’s cribbing from some long-lost Venom joint; it coalesces into something akin to High On Fire, had Matt Pike gone straight to that band from Asbestos Death without bonging out in the middle there with Sleep. Vocalist Neil McAdams has a touch of Pike to his vocals, in that corrosive post-Lemmy manner, but melded with the hellbent screech of the earliest Norwegian black metal bands and a second mortgage’s worth of chronically damaged Scando and Jap Eighties hardcore bawlers. That the lyrics are kind of boilerplate box-ticking exercises in crypto-apocalyptic nihilism – entropic oblivion holocaust slaughter pain wasteland masters sickness – is the only vague negative about this EP, and even then it really doesn’t matter much.

‘Fatal Error’: ‘Ace Of Spades’ as inflated to stadium size by Bathory. ‘Beneath The Crust’: what Slayer would have turned in if they’d made a point of showing off their hardcore collection in 1985 instead of 1995. ‘Murder’: the most caustically chugging and non-subgenre-denoted ‘metal’ track on here, it still manages to angrily throb like Entombed when they take the pace down, and if there’s one song on here that is most likely to lure in beardo metal kids of a Neurosis/Baroness/Kylesa stripe, it’s probably this one. (The fact that Kurt Ballou of Converge is behind the desk for their debut full-length, scheduled to drop in early 2010 on Southern Lord, will probably help somewhat as well.)

Seriously, you numbskulls: if you profess to have any interest in metal and don’t let Black Breath take over your life, you’re doing it wrong.