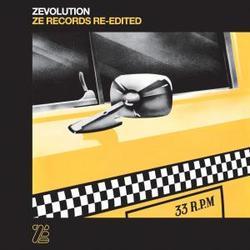 When the Lindstrom & Christabelle album lands at the start of next year, this type of wonked-out Eighties-soaked boogie FUNFUNFUN will likely garner wider attention still. You could do a lot worse than using Zevolution as an entry point. »

following their recent ze 30 anniversary compilation album, strut's collaboration with mighty new york imprint ze records continues this autumn with 'zevolution', bringing together new and rare dj edits of ze tracks by 14 leading producers. ze has continued to be a prime source for djs with dozens of re-edits surfacing in recent years, re-working and extending the label's experimental post-punk grooves for maximum dancefloor punch. many of the edits have become classics in their own right - on this album, strut feature todd terje's 'friendly children' re-work of gichy dan's 'on a day like today', soul mekanik's dubbed out treatment of kid creole's 'annie', still a staple in many dj boxes. others have surfaced briefly on limited white label 12s or on blog sites - the prolific social disco club from porto and idjut boys, whose brilliant re-touch of another kid creole track here, 'i'm corrupt', is much in-demand. for the album, strut also commissioned a fresh batch of versions, many transforming seminal ze tracks which have previously been tricky to play in clubs. richard sen sews together brilliantly the two parts of james white's fidgety 'almost black', italian dj team the barking dogs create a tracky beast from arto lindsay's beatless ze experiment 'pini pini' and luke howard and felix dickinson from horse meat disco create the best club version yet of aural exciters' 'spooks in space'. for the 'heads', there are ultra-rare tracks too - fat camp resurrect a david gamson track 'no turn on red', previously only available on an nme cover mount cassette. 'zevolution' features an extensive booklet including an introduction by re-edit king greg wilson and sleeve notes by bill brewster of dj history.
description from www.roughtrade.com