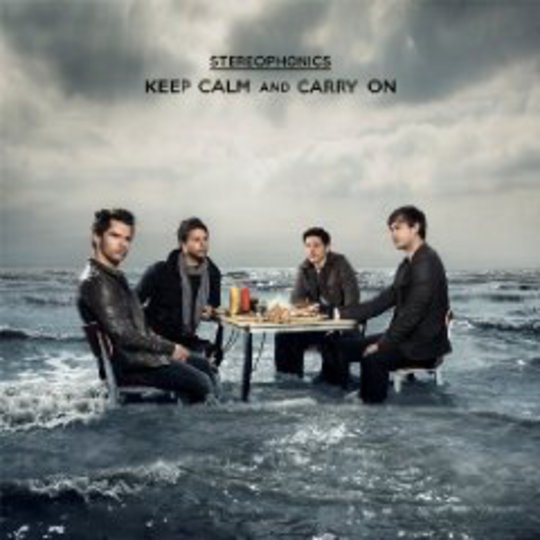 Possibly the first name that springs to mind when one thinks of no nonsense Britrock – usually in a negative light – Stereophonics are a curious group. It’s easy to dismiss them as turgid or plodding, but they can occasionally create a truly fantastic single, such as the nostalgic rush of their early hit ‘Local Boy In The Photograph’, or the synthy-pop of ‘Dakota’. However, more often than not, the Welsh band will follow such moments of surprise with a return to their familiar, plodding ways.

Their seventh studio album Keep Calm And Carry On certainly doesn’t add anything to the Stereophonics’ formula, and it sadly doesn’t really offer any of those one off moments that could surprise the doubters. In such familiar surroundings, the main strengths of the band – Kelly Jones’ eye for a decent pop-rock moment, and his rasping, craggy vocals – soon turn into the most annoying elements.

It seems that on occasion, Jones feels that having mastered the art of a chorus, he can just fill it with any old nonsense and take it to the bridge, but the lyrics on Keep Calm And Carry On really force you to pause and consider what on earth he's going on about. ‘Uppercut’ is a solid enough track, but with lines like “You look fit but you ain’t got it/Think you’re a dog well you’re just a bitch” it crosses the line into idiotic. When the chorus of ‘I Got Your Number’ turns out to be “1,2,3,4,5,6,7,8”, Jones sounds less of a dangerous rocker warning a woman what done him wrong and more like a primary school teacher leading the first class of term.

Many other bands in a similar field to the Stereophonics – Oasis, Kasabian for instance – fill their songs with similar lyrical nonsense, but get away with it more often than not, thanks to the posturing and faux-psychedelic swathes in which their music bathes.

Stereophonics, on the other hand, are meat and potatoes even by those hallowed standards. They do make some allowances for modernity – the album opens with the electronic beats of ‘She’s Alright (She’s With Me)’ – but everywhere else it’s tastefully fuzzed up guitars, bass and drums, and that rasp of a voice. With barely a solo to speak of, Jones’ voice is the only focus of attention, something which soon tires. When the closing track ‘Show Me How’ starts with a pretty formulaic piano pattern, it sounds revelatory in comparison to the tracks that have proceeded.

That’s not to say it’s all bad. Recent single ‘Innocent’ is almost a sequel to ‘Dakota’, the same racing rhythm driving an infectious chorus towards the finish line. ‘Live ‘N’ Love’, meanwhile, is the best Oasis track Noel Gallagher never wrote, an expansive rocker that will sound inarguably impressive at some enormo-gig next summer. It’s no coincidence that these two songs feature some of the less-glaring lyrical meanderings, and the slightest tinge of a different musical genre in the mix. It’s just a shame that once again, these moments are the exception rather than the rule.

This isn’t a particularly awful record – it’s simply a album full of typical sounding Stereophonics songs. If ever there’s a title that sums up a band’s ambitions and career trajectory, then Keep Calm And Carry On would be it.