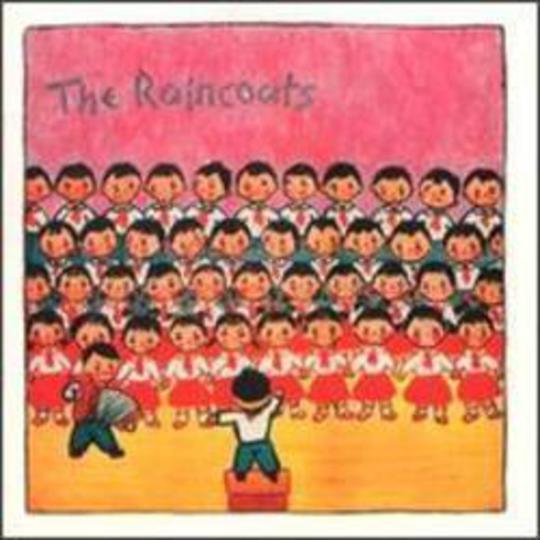 Gloriously ragged, The Raincoats are among the better adverts for the DIY empowerment of punk. Neither Ana da Silva (guitar) nor Gina Birch (bass) could play when they met at Hornsey College in 1976. Whereas a similar absence of skill was professed by many in fact accomplished punk-era musicians, da Silva and Birch were genuinely inept. They learned to play in public and on this, their beautiful eponymous debut album, the steep learning curve they embarked on imparts an air of imminent catastrophe throughout, their scrappy constructs ever on the verge of euphoric collapse.

By the time The Raincoats released their debut single, ‘Fairytale in the Supermarket’, on Rough Trade in April 1979, punk was over. Their sound, however, is a much more complex compound than straight-up punk. There’s a fraught folk element to it, as well as scraps of ska and, mainly through the abrasive violin playing of Vicky Aspinall, hints of The Velvet Underground that become blatant on some of their best songs.

Aspinall joined in 1978 as did ex-Slits drummer Palmolive, replacing Ross Crighton and Nick Turner and making The Raincoats an all-female outfit. Palmolive had left The Slits when it became apparent that her idiosyncratic drumming style (“like speech rhythms – she didn’t think in terms of bar lines,” in London Musicians’ Collective founder Steve Beresford’s words) wasn’t going to be able to provide the reggae-inflected skank they would perfect on 1979’s Cut. Her fidgety, tom-heavy style is a key part of The Raincoats’ restless energy, its violent ejaculatory spurts adding a level of sonic sophistication to ‘Off Duty Trip’, written in response to a rape case in which a judge acquitted the defendant so as not to damage his army career.

Palmolive also contributed a song, the alternately lilting and jarring fracture of ‘Adventures Close to Home'. Written before she left the Slits, the song also appeared – in a much more polished version – on Cut. The difference between the two is illustrative of the paradoxical strength of the Raincoats’ wayward delivery: over a prominent upper-octave bassline the vocal is shared between members, overlapping and dropping in and out of off-key harmonies in dizzyingly shifting patterns that powerfully communicate the lyric’s bi-polar blend of joy and pain.

The aforementioned ‘Off Duty Trip’, written by Aspinall, is atypical in its straightforwardness. For the most part the band’s songs are more oblique, particularly those written by the Portuguese-born, Dylan-loving da Silva. Consider the wheezing, pattering lope of 'The Void', which sounds like about eight Breeders songs at once. Her ‘You’re a Million’ is also extraordinary, both lyrically and musically. Aspinall’s violin provides the song’s tensile strength with its John Cale-like drone as it moves outward from a lulling guitar strum into tense stand-off between admissions of a now-ended love and a periodically repeated cry of ‘Stop here!’, da Silva’s delivery embodying the agony of failed love.

The song is the first in a remarkable trio that closes the album. ‘In Love’ forms its central strut, a fantastically lo-fi moan about how debilitating love's first flush is, that roams the same acoustic terrain, albeit in a sunnier register, as the Velvet Underground’s ‘The Black Angel’s Death Song’. Gina Birch’s vocal delivery is the highlight here, her stuttered phrasing on the chorus a DIY version of repeat echo. It’s another example of the Raincoats making a virtue of amateurishness, their home-grown solutions proving more emotionally compelling than slicker professional approaches.

On album closer ‘No Looking’ Birch translates and adapts a Jacques Prévert poem about being jilted by a former lover. Her vocal, couched in a squeakily melancholy violin part, builds from downbeat self-pity into a climactic shout of ‘No looking at me/No looking at me’, the band joining her in an admission of despair that their defiance recasts as euphoria.

These moments, when the intense emotion lying at the heart of the Raincoats’ music floods out between the scratchy guitar, atonal violin and sprawling, tumbling rhythm section, explain why Kurt Cobain wrote in the liner notes to a 1993 reissue of the album that ‘[R]ather than listening to them, I feel like I’m listening in on them.’ Those liner notes are reproduced in this new edition of the album, alongside a live disc (unavailable at the time of review, I’m afraid) and two brief memoirs by Birch and da Silva. Debut single ‘Fairytale in the Supermarket’, which wasn’t on the original album, is now the opening track. The album has also been remastered, and from comparing the CD with the original vinyl it sounds as though quite a bit of tape hiss has been removed, and the low level of the vocal at the beginning of their winning cover of The Kinks’ ‘Lola’ has been properly equalized. Thankfully ‘In Love’ is still a muffled, distorted, spiky smear: as with so much of the Raincoat’s unproficient, tattered, magical sound, it’d be wrong for it to be any other way when they make sounding wrong so completely right.