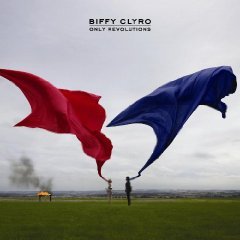 Grandeur suits Biffy Clyro, and their overblown songs manage to tug effectively on heartstrings despite their foibles. »

'only revolutions', biffy clyro's fifth album and second with 14th floor records, was recorded in la, once again with producer gggarth richardson (rage against the machine, red hot chili peppers) at the helm, and mixed by andy wallace (coldplay, nirvana). multiple grammy-winning composer david campbell - who has worked with an array of legendary talents including marvin gaye, bob dylan, metallica and radiohead, and who won an oscar for the score to 'brokeback mountain' - contributes lush orchestration throughout. the album also highlights a special guest collaboration with queens of the stone age frontman josh homme on the epic stand-out anthem 'bubbles'. after the overwhelming sadness of 'puzzle', 'only revolutions' sees a more hopeful side to biffy clyro. the songs are perfectly crafted and full of the idiosyncrasies that define the band's unique take on contemporary rock. the album is heralded with the military thump of 'the captain' before it erupts into a rush of serrated riffs and euphoric horns. further highlights include the stripped down agony / ecstasy dilemma of 'god and satan', the soaring power of the hauntingly romantic 'man of horror' and the visceral nastiness of 'shock shock'.
description from www.roughtrade.com