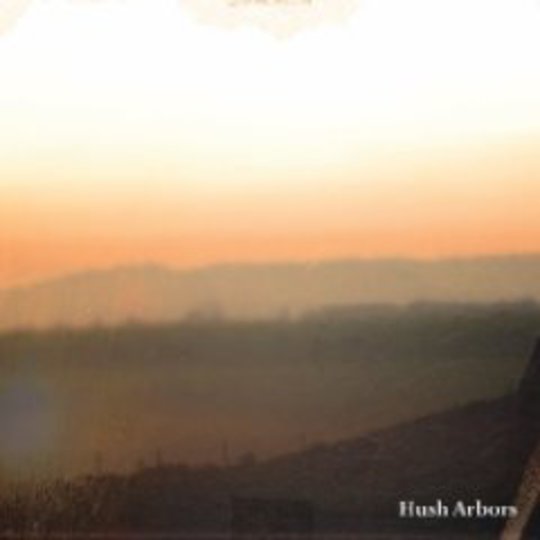 In the liner notes to Yankee Reality I learnt that the album is dedicated to Link Wray. Wray was a man so adept at creating memorable, menacing guitar chords that his signature track ‘Rumble’ was banned from many radio stations for glorifying gang violence. It is entirely instrumental. Yankee Reality, Hush Arbors’ second album for Thurston Moore’s Ecstatic Peace label, is unlikely to menace anybody. There are occasional feedback-laden guitars which would no doubt delight arch-distortionist Wray, but their appearance is sporadic. It only takes a scratch of the surface to reveal that this is an album made up at heart of fuzzy folk songs.

Hush Arbors is Keith Wood, a Virginian with a plaintive falsetto, and he is accompanied here as usual by guitarist Leon Dufficy and unusually by J. Mascis. Mascis is producer and occasional guitarist, drummer and Mellotron man, although the tracks that sound most like a J. Mascis record aren’t necessarily the ones he plays on. It is, however where the guitar incursions are prominent and frequent that this album works best. Where they are absent, the album sinks into a tedious torpor.

Mascis plays on ‘Day Before’, where the album begins with a ball of fuzz two minutes long. Both he and Wood fail to lift this into the realms of the notable, or even noticeable. It’s the second track, ‘Lisbon’, where this album first really grabs your attention. Wood breathlessly informs us that he’s “Wishing for the world’s embrace” over an infectious pop melody, before a crackling guitar solo rips the song to shreds. It’s an appealing model. Folk rock reimagined for an alternate world where Thurston Moore is The Man and J. Mascis is behind your mixing-desk. ‘Fast Asleep’ repeats the trick, a softly-spoken ballad that is vulnerable to incursions from gritty, threatening guitars.

After that, however, the adrenalin begins to run out and a kind of inertia begins to creep in. ‘So They Say’ is lackadaisical, and it meanders into ‘One Way Ticket’ with neither doing much to justify their combined running time of twelve-and-a-half minutes. ‘Coming Home’ ups the tempo, but fails to quicken the pulse. More enticing are the charming, old-fashioned folk of ‘Sun Shall’ and ‘Take It Easy’ a gorgeous slice of nostalgic, psychedelic Americana. The album builds to a glorious crescendo with Mascis’ solo on ‘For While You Slept’ followed by the equally stormy ‘Devil Made You High’.

Lyrically, Wood’s songs are mournful, ghostly love songs of loss and longing. The record begins with “The winter has taken bones/ And piled them at the door”, a nod back to his album ‘Landscape of Bone’, which honoured its title by featuring bones in the title and lyrics of every track. It’s not the last appearance of bones in the lyrics, or of the imagery of the wilderness.

The wilderness setting is sadly appropriate because in trying to forge a path between the fragile folk of Bon Iver and the exhilarating grunge of Dinosaur Jr., Yankee Reality has become stranded in no man’s land. On first listen I enjoyed this album a lot more, perhaps wrong-footed by the twin peaks of ‘Lisbon’ and ‘Devil Made You High’ which effectively bookend the album. Repeated listens, however, mired me in the listless malaise of the middle section. Hush Arbors can be applauded for venturing off into unchartered territory, but on Yankee Reality he too often seems to have lost all sense of direction.