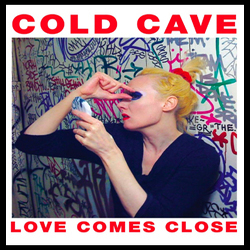 'love comes close' is the debut full-length from cold cave. after releasing singles on hospital productions, what's your rupture?, and dais records, as well as a compilation of early material (cremations, hospital productions), cold cave is now releasing their first realized vision of modern pop music through matador - it was originally released via their own publishing house, heartworm press. balance is one of cold cave's most dominant features, laced with equal parts of romance and nihilism. somewhere in the realms of negative hiss and out-of-body bliss, there is a peak awaiting all who enter. wesley elsold is joined by an orbiting line-up that includes fellow allies caralee mcelroy (of the experimental indie rock-phenomenon xiu xiu), dominick fernow (contemporary noise icon prurient) max g morton (celebrated author) and j benoit. cold cave is a force that has been compared to erasure and whitehouse, one that just does what it does, without forcing unnatural laws. they are a true rarity in this instamatic culture.
description from www.roughtrade.com