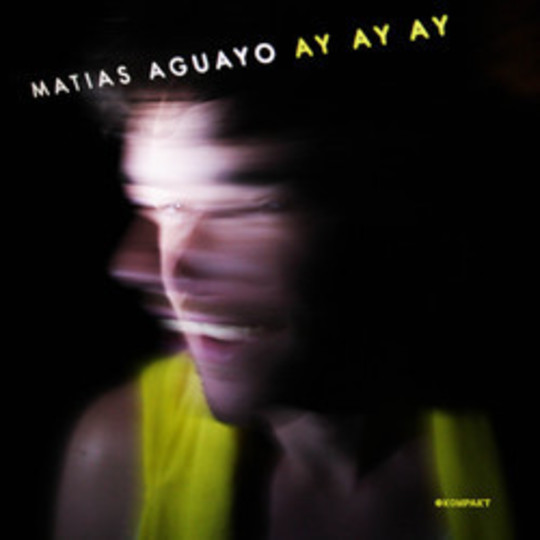 Already more than established on the European house scene, it’s doubtful that Chilean-born producer Matias Aguayo craves a commercial breakthrough. There’s an inherent awkwardness to his signature sound that would likely prevent this, and besides, anyone who assembles their album in Santiago, Buenos Aires, Paris and Berlin – I’ll pause to let you sing ‘Pop Muzik’ to yourself – is probably getting by alright. Ay Ay Ay is his second artist album, although he’s been around and about the German dance scene for over a decade; most of its 11 tracks betray a desire to be simultaneously accessible and oddball. As it goes, he probably won’t thank me for calling seven-minute closer ‘Juanita’ a slightly more subtle version of Samim’s 2008 underground-gone-mainstream hit ‘Heater’, but it’s a wobbly midpaced house track underpinned by a big fat accordion, so the comparison is presented on a plate somewhat.

The sticking point about Aguayo’s productions, and I realise the degree to which it’s problematic will vary greatly from listener to listener, is that they’re all variations on the same basic idea, and you have to really like said idea to get that much lasting enjoyment out of these 58 minutes. ‘Menta Latte’, the first track, gives an optimistic outlook as regards the remainder of Ay Ay Ay, consisting of a hypnotically unchanging and feasibly Krautrock-influenced bassline which has a buzzing jumble of sounds – human beatbox, bell-clear classic house keys, twittery birdsong, Aguayo himself chanting the title and lyrics like “I need a drink, I need it fast!” – added to it over six and a half minutes. It’s pretty dope, all told, but it’s probably the album’s best moment.

Many of the other tracks are more minimal (as in the adjective rather than the genre: Aguayo is disassociated from Kompakt’s pulsing-loops-in-sparse-German-loft-apartments posse to the extent that he released a single, ‘Minimal’, last year with lyrics taking the piss out of the genre) in their makeup, but you can basically rely on our man singing a mixture of Spanish and babytalk, some background vox FX-ed with to serve as a rhythm of sorts, and a loping beat in the 120bpm ballpark. Nearly every track will have an element that can’t fail to put a smile on your face – ‘Mucho Viento’’s closing section features something that sounds like a swanee whistle – but it would not be wholly unreasonable to describe Ay Ay Ay as quirky, and this quirkiness may prove a dealbreaker.

‘Ritmo Juarez’ and ‘Koro Koro’ bathe the midsection of the album in African heat, which is a tasteful-in-a-good-way semi-diversion. The former coasts along on appealingly flat, live-sounding drums and what I’m going to call a tribal chant, in lieu of a more appropriate descriptive term (I mean, the voices heard here presumably don’t come from an actual tribe); the latter coming off like an updated take on those Nineties-vintage dancefloor remixes of African pop songs. I had one of those 'why didn’t I realise this ruled until now?' moments earlier in the year with the acid house versh of Mory Kante’s ‘Yeke Yeke’, so would have no problem getting down to this.

While Matias Aguayo is a staunch advocate of brash, carnival-like atmos in his club nights – this belief is baldly stated in the aforementioned ‘Minimal’ – it may be that Ay Ay Ay ends up being more of a home-listening artifact. It’s a clever and often highly entertaining album with inbuilt limitations, but if you buy one record this year whose title is possibly a reference to Bumblebee Man from The Simpsons, it should probably be this one.