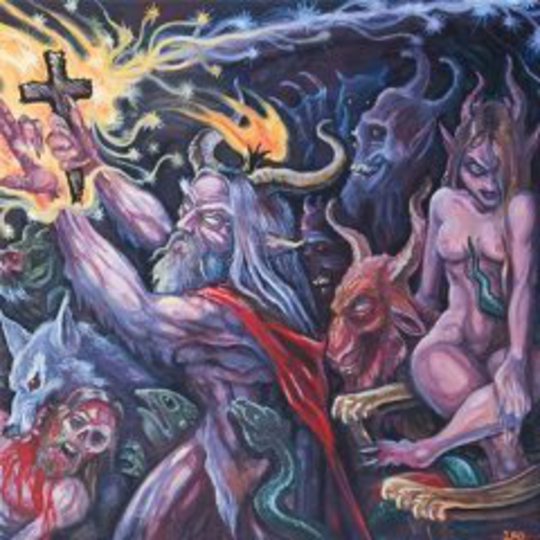 A sloth being ground to death by a herd of strolling elephants.

That’s stoner rock, right? It’s sludge metal toned down and thrown into a hazier realm. Saviours seem to have been pinned with this tag nonetheless, which means Accelerated Living may ultimately be dismissed for not being slow enough. Or something. Though knuckle-scrapingly low riffs certainly rumble convincingly within these ten songs, and track lengths are extended beyond thrash metal’s usually ample stopwatch, this definitely has the required impact.

‘Livin’ In The Void’ is a case in point. One of the longer songs here, its main theme may be reminiscent of a hundred weed-wreathed acts, but the palm muted syncopations and hollering vocals are faster paced and more strident. When the eerie feedback and pick scrapes filter through three quarters of the way in, it could easily be soundtracking a particularly notorious thunderstorm. Saviours have clearly worked through Seventies rock influences, best hinted at on ‘The Rope of Carnal Knowledge’, the handbooks of Eighties thrash, as winked at on ‘Apocalypse World Split’ and full blown metal with ‘Acid Hand’ and the shin-splinteringly excellent ‘F.G.W.’ The resultant stew is naturally a spine-creasing workout.

Choose a track. Breathe deep. Press play. Now… REACT! There’s no way your foot isn’t stamping along to ‘Burnin’ Cross’ and its double-time drums, sounding as if they are being thumped into paste. The harmony guitars can’t help but sound like throwbacks to a simpler time, but isn’t that what metal is about? You know, primal urges and the will to really engulf the listener in swathes of precise, meaty noise? Accelerated Living is relentless in this case. It’s not especially fast, it’s more about density and weight, but again not in an endless black hole sense like be-robed menaces we could mention. Rather it’s the battle-esque galloping, the indistinct yet ultimately passionate vocals, the comparative restraint until soloing sets in that keeps everything running apace.

Where Saviours will not win any points is, almost inevitably, in the originality stakes. These waveforms aren’t going to savage that reliably informed idea you have of the genre. Rather it will coax it and comfort it. It might even fall asleep on this comfy blanket of reassurance. Crucially this means Saviours are fighting for memory space and it’s difficult to see exactly where they will fit into your listening habits. This doesn’t automatically demote them to being dismissed. Indulging in a bout of the heavy stuff could happily include samples from Accelerated Living as an example of competent and impressively tight metal. Perhaps the key failing, if indeed it is one, is that this record does everything you’d expect it to – breakdowns at the right moment, relentless pacing, chugging palm muted low-end riffs. So, providing you like all these things you’ll be nodding your head vigorously and occasionally throwing the horns when out of plain sight. What it doesn’t do is grip your skull and force it into the nearest site of extreme turbulence. It does its best with what it has, which certainly isn’t inadequate. Nevertheless, it’s difficult to recommend it over some other recent heavy triumphs. It seems unfair to be down on a record that does so much so right, deftly weaving around mediocrity like an experienced joyrider. This nagging feeling that I could be listening to something else more fulfilling, more furious, more righteous is there and it’s at this point that I can’t really ignore it.

A snappy conclusion then. A good record full of metal’s own stock tricks and bellowed out a little to sound suitably huge. Perversely though it’s because it does these things so well, but does little else beyond them, that this record holds less interest than the cream of 2009’s output.