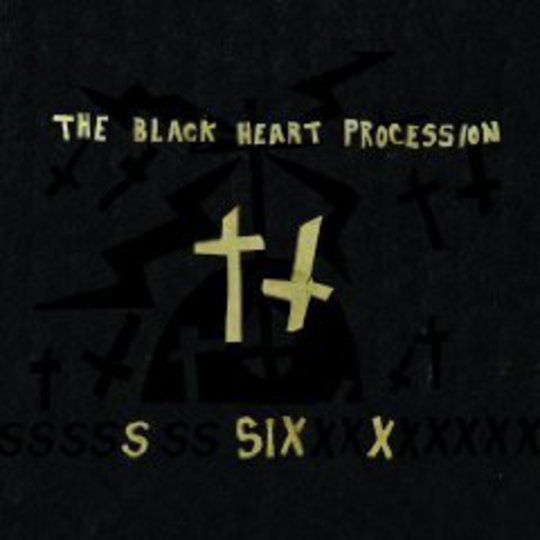 Upon being recommended (tentatively) the new record from The Black Heart Procession, a friend said to me: “Bleak is fine with me. Lap it up. I just can’t stand when singers start whining. These guys seem to have avoided that though. Maybe it’s the deep voices.” This idea of there being separate strands of miserabilism is where The Black Heart Procession make their money, or don’t, as the economic realities of popular music would have it. The thing is, beneath the day-glo grousing of emo, or the trite angst-porn of people like Staind, there is a far more satisfying darkness to be found. Anyone who has ever heard a record by The Dears or Arab Strap will know all about this. A drama that is not characterized by a melo- prefix, smooth and luxuriant like a fine patchwork blanket fashioned from regrets. There is a comfort down there in the darkness, a stoic yet chaotic blend of bittersweet memories and defence mechanisms against the pain they cause. “The comfort in being sad” as Kurt Cobain once sang. There is also a rotten sense of humour, and a contempt for anyone who doesn’t want to linger on the dark side a while. When it’s done well, music born of these motives can never be called whiney. The Black Heart Procession happen to do it very well.

Six opener, ‘When You Finish Me’, has a high-register piano and a deep, croaked vocal, as if facing off against each other. The cavernous space between the two is subsumed by the power both generate. Alongside album mid point ‘Drugs’, it contains the most nakedly emotive moments on ‘Six’. Both songs are brittle ballads about a lover who has used up everything her partner had to give. ‘Drugs’ is grimly majestic in particular, at times recalling the emotional exhaustion of Deserters Songs-era Mercury Rev.

Track two, ‘Wasteland’, is the other side of the coin. This is where the difference between self-pity and greater artistic ambitions really proves itself. It is present in the slow and deliberate bassline, the rolling curmudgeon of palm muted guitars and mournful choir. This is intelligence that revels in its own darkness, with a glint in its eye. Lyrics like “You’re here to torture me, I’ve come to hell for you, and I’m not leaving till I tear out your heart” are delivered with just enough of a smirk to contrast the cloying gloom of the previous number. For the most part Six walks the line between these two positions; with the blackest of blues-swagger present on several tales of torturous love and dark deeds. The 13 songs on Six are rich and exquisitely constructed, perfectly-pitched baroque riffs and orchestration are juxtaposed with searingly compelling lyrical imagery, another highlight coming on ‘Liars Ink’: “Time won’t forget your lies, time can’t forget your lies, till the day you die”. On paper these words don’t seem particularly intense, but on record The Black Heart Procession make them sound like reprimands from Satan himself.

Bands like The Black Heart Procession will probably always be ‘underground’, at least in sales terms. They do not have the self-indulgent simplicity to be loved by the small brains of those who propel supposedly difficult music to chart success, but they produce a multi-layered darkness that serious music fans will always appreciate. I think, as well, that the deep voices probably do help.