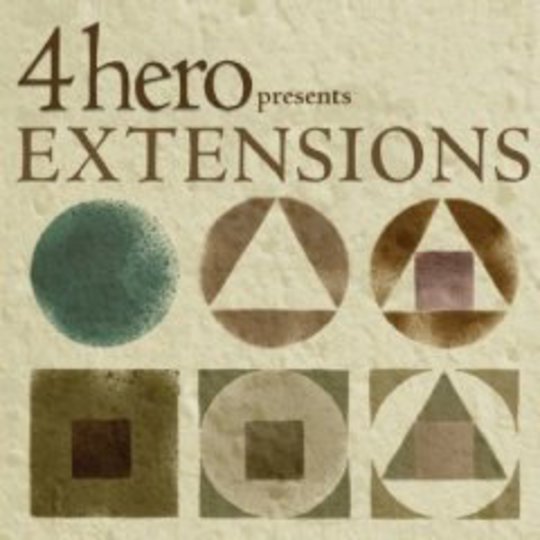 Anyone who has a natural compulsion to run to the hills when the words 'nu jazz' are uttered may want to flee with some haste at this point. Extensions consists of delicate reworking of various tracks by 4hero, a.k.a North London drum and bass pioneers Dego McFarlane and Mark Mac, which have been recorded by a selection of artists who populate the nu jazz genre. Needless to say, the fractured rave-gone-wrong darkcore tune ‘Mr. Kirk’s Nightmare’ does not get a look in, although the concept of a slick and soulful rendition of that particular song would be an intriguing proposition. But listeners who have followed 4hero’s career since those early days won’t be surprised at the choice of tracks here—a jazz influence was creeping into their music as far back as the 1993 EP, Journey From the Light.

Their work may have become a little too coffee table for the purists, but that hasn’t prevented Mac and McFarlane from releasing records at a furious clip through their Reinforced label, which helped kickstart the broken beat phenomenon in the early Nineties. The influence of that genre is occasionally felt on Extensions, with some of the artists present taking those skittering 4hero rhythms and tying them down with touchstones common to the nu jazz genre (soul, funk, jazz fusion). If the general population outside the broken beat/drum and bass worlds are aware of 4hero, it’s for the 1998 album Two Pages, which picked up a Mercury Music Prize nomination and is often plundered for inspiration here.

The album begins with a reworking of the classic ‘Universal Love,’ which opened Parallel Universe back in ’95 with sultry vocals, squalling sax and a clattering beat. Here, the Sonar Kollektiv Orchester fill the track with bolshy strings and a lounge-y rhythm, adding a few late-night textures and a film noir feel that perfectly suits the song. ‘Universal Love’ is a decent harbinger of what’s to come on Extensions, with many of the artists subtly entangling their own ideas and impulses around rudimentary templates set down by 4hero. ‘Third Stream’ is torn from Two Pages by the Robert Mitchell 3io, who decide against mimicking the stretched out violin arrangements of the original, instead offering somber piano runs and the quite wonderful sound of a live drummer attempting a few drum and bass rhythms.

What makes Extensions a cut above usual exercises of this type is the lack of reverence involved. It never feels like any of the artists are in awe of the source material, and are happy to take a basic idea from 4hero and expand its musical parameters. So the tinny, wafer-thin beats that made ‘People Always Criticise Us’ from Parallel Universe so distinctive are thrown out of the window by Vince Vella’s Cuban Collective, who replace them with a galloping rhythm and a thick storm of Rhodes piano and brass. Likewise, ‘Humans’, which is the standout track here, is totally transformed from its origins as a slight piece of Moog-infused bloopy electronica. Instead, Sub Ensemble turn it into a slow-build sax number that sounds like it’s being performed in a smoke-filled backroom populated by a host of redoubtable scar-faced characters.

Surprisingly, there are only a few misfires. The [re:jazz] version of ‘Star Chasers’ is a little sappy and certainly misses the strident beat of the original, while the decision to shackle (yet another) tribute to Dave Brubeck’s ‘Take Five’ riff to ‘Cosmic Tree’ feels unnecessary. But it’s moments like Luke Parkhouse’s decision to take ‘Blank Cells’ (originally from the 2001 album Creating Patterns) and speed it up significantly while working in elements that wouldn’t sound out of place in a James Bond theme that truly inspire. The bulk of the artists here have essentially burrowed their way to the core of what made 4hero such an attractive draw in the first place, by refusing to imitate what went before, and instead taking these songs by the scruff of the neck and forging their own unique paths with them.