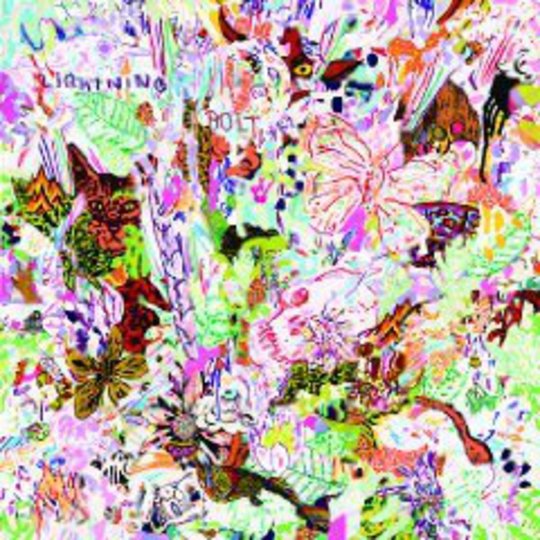 It’s a small wonder that Lightning Bolt drummer and ‘vocalist’ Brian Chippendale manages to thrash out his pile-driving, hummingbird-on-PCP beats at all, given that he must presumably be sporting a trouser tent the height of Nelson’s Column for the duration of his every stint behind the kit. It’s genuinely tough to think of any other noise-rock sticksman who quite achieves the same strata of gleefully malevolent abandon that seems to be Chippendale’s permanent default setting: this is clearly a man for whom the phrase “bit of a headache, actually” doesn't often get an airing.

Whether you’ve actively sought out one of Lightning Bolt’s semi-impromptu 10am patio gigs at ATP, or you just happened to be within a 400-mile radius of the festival site at the time, you’ll be aware that Chippendale live comes across something like Seb Roachford with his knackers wired to a car battery. Happily, both Chippendale and bassist Brian Gibson achieve pretty much the same Herculean level of deranged intensity on record, a fact that Earthly Delights takes great pains (quite possibly literal ones, by the sounds of it) to establish within two seconds of starting up, and then goes on to underline repeatedly with a blackened stump of crumbly, paper-shredding charcoal for the remainder of its 50-minute runtime.

Opener ‘Sound Guardians’, unsurprisingly enough, is febrile in the extreme, Gibson’s flanged feedback acting as a smouldering fuse that quickly erupts into a mushroom cloud of hide-flaying swamp thrash. There are numerous passages early on in which Chippendale actually appears to be - gasp! - playing along with the bludgeoning riffage. Fret not though, Lightning Bolt fans: soon enough, he’s ricocheting off in more directions than an antique musket being fired through a rusty colander, leaving your sobbing rhythm receptors convinced that time itself is suffering some sort of grand mal seizure.

The overtly thrashy theme of ‘Sound Guardians’ spills over into follow-up ‘Nation Of Boar’ without significant pause for breath, pile-driving us straight into what could well be the only song on Beelzebub’s ‘joyriding through the Earth’s core’ iPod playlist. Except, defying the physical properties of the mp3, it’s somehow managed to become stuck on one hellish three-bar loop in the churning gut of the middle eight. We can only assume that the heavily distorted howls faintly audible somewhere in the background are Old Nick’s own tortured screams of submission. The massive pussy.

And so on and so forth, we the ant-like listeners lashed to the rigging, shrieking dementedly into the very maw of the force 11 gale threatening to capsize us. Except it’d be rather too easy to sketch this as a record suitable only for chewing off your own tongue to: in fact, just like the Hieronymus Bosch triptych it appears to name-check, Earthly Delights is actually a work far richer in tone, shade and technique than its lurid sheen might suggest. ‘Colossus’ and ‘Flooded Chamber’ both do an admirable job of pointing this out - the former, occurring early on in proceedings, is a ghoulish seven-minute visitation that lumbers hesitantly in like the zombified cadaver of grunge itself, pauses momentarily for effect, then promptly tears its own face off and eats it.

The latter, meanwhile, is one of the most gruelling experiences on the entire record, a grotesquely rickety affair stapled together from a skip-load of profoundly disturbing (not to mention truly ear-splitting - use headphones at your own risk) glitches, hiccups and honkings that don’t sound even remotely capable of carrying their own weight through to the end of the track. ‘Funny Farm’, when it kicks in immediately afterwards, feels oddly like light relief, which is a strange accusation to level at a hellishly distorted Southern-fried hoedown at which we’re all dancing barefoot on white-hot razor wire. Compared to either, the purgatorial gibbering that comprises throwaway final-third experiment ‘Rain On The Lake I’m Swimming In’ seems positively benign.

As if making up for lost time, ‘S.O.S.’ drags us by the uvula back into the bowels of the brutal spaz-thrash squall we started off in, leaving only the 12-minute behemoth ‘Transmissionary’ to somehow coax and comfort us back from the brink of oblivion. Except it doesn’t really bother trying. At all. Instead, it sounds more like Chippendale and Gibson melted all the master tapes from the rest of the album together, turned them back to front, and ran the whole sickening mess back through the mixing desk at double volume. While cackling a lot.

Actually, in terms of variations in pitch and rhythm, subtleties of light and shade, this closing tour de force is easily the most impressive and diverse of Earthly Delight’s witheringly caustic offerings. Whether or not this means it should’ve been put back at the start of the record, before our collective cochlea were left too spongy and seeping to actually hear much besides our own internal ‘happy place’ mantras, is by now something of a moot point.