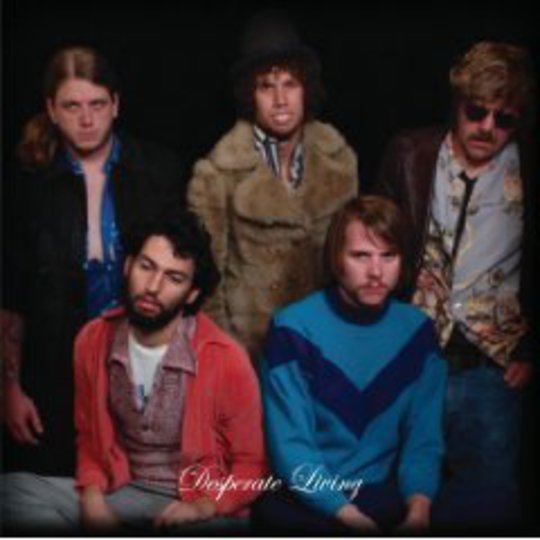 Post-rock, hardcore, Nintendocore – whatever lexical fusion you want to use to describe your progressive modern music, it’s still hard for bands to really excel at it. The very thing that makes it exciting – its challenging inaccessibility – is often the thing that makes its bands utterly forgettable. They hardly make it easier for themselves either – if you call yourselves And So I Watched You From Afar, you’ll have to be pretty good for anyone to bother remembering your name. At least HORSE The Band don’t suffer from this problem, and Desperate Living is made instantly memorable for the fact that one of the blokes on the cover looks like Keith Lemon. Oh, and because it rocks.

After an anti-climatic start, SNES synths soon replace the pedestrian pads that prevented ‘Cloudwalker’ from grabbing your attention, despite the tantalisingly feral vocals. Title-track ‘Desperate Living’ showcases HORSE’s 8-bit prowess, before this potential is fully exploited on ‘The Failure Of All Things’ with its face-melting Game Boy solo. By the end, the rhythm is so deadly it is dragging you around by the throat, while the guitar punches you in the face.

Desperate Living is more than just fury though. ‘Big Business’ includes a bluesy section which would be deemed too twisted for an Eighties Matchbox B-line Disaster album, whereas ‘Science Police’ bursts out as some kind of Spandau Ballet-core mind-fuck. The plonky breaks that give this track coherence show that HORSE have been inspired by a surprisingly broad spectrum of music, yet they draw from it in such a round-about way, you end up thinking it’s probably just a coincidence. ‘Lord Gold Wand of Unyielding’ is similarly decked out with a few bars of big, fat power chords and melodic vocals that vaguely resemble a chorus, while closing track, ‘Arrive’, is an anthem that pounds with life-affirming force (though its predecessor, ‘Rape Escape’, with its sombre, reflective piano may have been a more suitable ender). There is even a pop song lost somewhere amongst the swelling drums and maniacal vocals of ‘HORSE The Song’, before an unexpectedly exhilarating soundclash of thunderclap guitars and 8-bit melodies sends the track spiralling out of control.

‘Shapeshift’ boasts Xui Xui’s Jamie Stewart on vocals and 'noise and sound design production'. Whatever that means, it works, and it serves to highlight the room for improvement on Desperate Living, as one of the only tracks on the album that manages to keep its focus while retaining its dynamism. All too often, HORSE get a little lost in their noise vortex, only to emerge out the other end, hundreds of miles from their start-point. This does ensure that the record is consistently and refreshingly challenging, but there remains a sense that HORSE haven’t got enough big ideas to flesh out their imaginative structures. ‘Golden Mummy Golden Bird’ for example, is no less technically astounding than any of the other tracks, but it has a tendency to leave you feeling a little unfulfilled, as the dreamy guitar-tapping sections plod along, punctuated only by what at this stage in the album are fairly predictable chugging riffs and convulsive drums.

There is no lack of technical imagination on Desperate Living, with an exciting mesh of timbres and complex structures to keep you fixated. This gives HORSE enough distinction to stand out in their field – something not easily achieved for a band who show such furious antipathy for the conventions of ‘good’ music. Still, it’s hard to avoid thinking that the album would be much more effective and sound much more complete if it shed a little excess weight. A more refined version, without the cliché spoken-word samples and occasional moments of flatness, would leave the listener satisfied, without feeling over-faced.