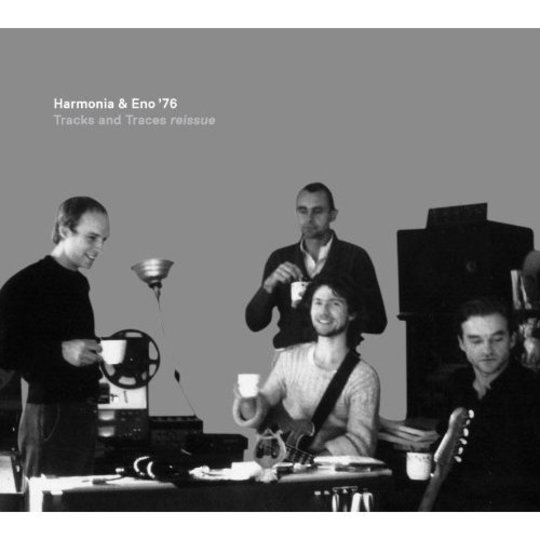 For the uninitiated, Harmonia were one of those legendary collaborations from the fertile period of Krautrock without which we'd have no Electro, Techno, or Post-Rock, as we know them. Comprised of Michael Rother (from Neu!), and Moebius & Roedelius (better known as Cluster), the trio were re-united by Eno on a break between two of his best records, Another Green World and Before and After Science. Any one branch of the family tree should prompt some intrigue, but taken together, you can see why this re-working of lost recordings (first released in 1997) was one of the most exciting discoveries for audiophiles, in recent years. It’s much more than pop trivia to note that Eno was (literally) on his way to work with Bowie, on Low; there’s a fairly useful metaphor in there, too.

OK. That’s the bit that writes itself. As anyone who’s tried to navigate Krautrock knows, with or without Julian Cope’s Krautrocksampler to hand, there’s a lot of unlistenable experimentation from the early years of Kluster, Neu!, and Kraftwerk, that sounds like the elevator music in a capricious spaceship designed by Douglas Adams. There’s also a lot of crossover with late-60s psychedelia made by German hippies whose commune-derived ideals meant that everyone got to “express themselves”.

Coming relatively late in the day – when sonic experimentation didn’t take hours of re-wiring custom-built machines, and therefore could be combined with musical improvisation while the excitement remained – the predominant sense is of a microbial zoo where strange new sounds shuffle and jitter about, like little biological machines on the cusp of sentience or personality. That’s to say, the tracks-as-lifeforms are never entirely mechanical in their precise, looped rhythms, because the minimal melodic variation suggests the little critters exploring; groping towards consciousness or meaning. In the years before computers, as we know them, Harmonia & Eno used a lot of analogue reverb and gating, so that distorted or fuzzed pulses could be clipped rather than bleeding together – that’s where the submerged sound comes from. Around this time, Kraftwerk were talking about the Man-Machine, which has had an immeasurable influence on popular music, but Harmonia & Eno seem to have kept any ideas about the Machine-Organism to themselves: it’s something that the likes of Aphex Twin, Autechre, Boards of Canada seem to re-discover periodically, without the need for rhetoric.

For those who know the 1997 version, ‘Welcome’ is a stunning addition to the album that Krautrock completists already know contains some of the best work by all concerned. Taken from Rother’s tapes, it has both horizontal and vertical movement: his subtle slide-guitar raising the listener to the gentlest ecstasy. ‘Helicon 1’ by Mogwai had been a personal musical epiphany back in ’97, but so was ‘The Big Ship’ (from Eno’s Another Green World) when I heard it a year later – showing that the “post-rock dynamic” was neither new, nor incompatible with minimal electronica. Elsewhere on the album, ‘Almost’ is a masterpiece – an apex of beautiful songwriting for all concerned, although it feels most like Eno’s work. Starting out with the plaintive twitter of a mechanical bird, singing alone (vwi-vwi, vwi-vwi…! vwi-vwi, vwi-vwi…!) an almost subliminal electric piano echoes its rhythm, evoking its sadness at not being quite real. After a few bars, these are joined by a delicate, minimally processed piano played with classical grace, that promises a place where these machines can escape their destiny of mindless routines.

Conceptually, something similar is going on in ‘Les Desmoiselles’, which contrasts an almost idiotically chugging steam engine rhythm, with more elegant synth melodies, as if to question the definition of good taste. There are some clues to the foursome’s awareness of how groundbreaking their music was in the title of the track (as in ‘Les Desmoiselles d’Avignon’, Picasso’s primitivist reworking of an impressionist classic, inspired by African carvings). For listeners who grew up in the 80s, incongruous synth-tones were par for the course, due to presets on keyboards, and many have been selected out of the breeding pool, since then; in the hands of Harmonia & Eno, though, there’s always an underlying awareness of the need to work out what each new sound best expresses.

Closest to the whimsical side of ‘70s Eno is ‘Luneberg Heath’ (whose lyric runs “don’t get lost on / Lun-e-berg Heath…” over and over). The unidentified instrument here sounds like a synthetic tuba, but the jolly idiocy of the riff allows for surprising emotional tweaks when it changes direction – think ‘NY Conversation’ from Lou Reed’s Transformer. Eno’s vocal has the subtle menace of his own ‘Dead Finks Don’t Talk’, ‘The Fat Lady of Limburg’, and various Roxy tracks – that bad-trip moment 70s songwriters do so well, when you’re about to plunge into Wonderland, or the clown’s about to peel off his face, but you have no idea how bad it’s going to be, beneath.

Central to the album is the fifteen minute ‘Sometimes in Autumn’ – their space-rock outing. It’s musically and sonically similar to the longer soundscapes Pink Floyd had been making, and opens with a sort of minimalist version of a Roger Waters bass-riff - those two-note thrums approximating a helicopter. None of the artists involved were quite so varied within one album, or within one track, as here; its inclusion makes you think of the range of styles thrown into Faust IV (home to the original ‘Krautrock’), although fortunately not the dire sonic collage that is The Faust Tapes.

Yes, this is a collection of Tracks and Traces, meticulously edited in the late-90s, and again more recently, so that none of the musical ideas outstay their welcome – in this respect, it’s not quite an album, and when the less melodically surprising tracks fade out, you feel like you’re moving along to the next case in the exhibit, whereas other albums by Cluster, Harmonia, or Cluster & Eno sustain a mood, and often a weird nervous energy, with their generally more urgent rhythms. It’s damning with faint praise to call this “the best collection of fugitive pieces by musical innovators you won’t regret buying” but that’s what it is.