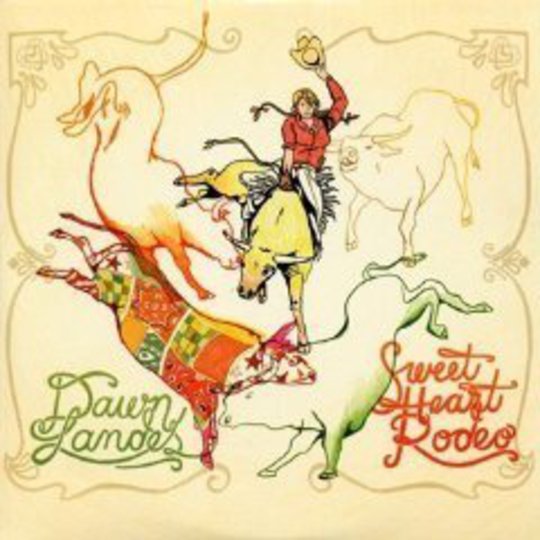 Dawn Landes is from New York via Louisville, Kentucky. In addition to making solo records and performing as part of Hem, she also moonlights as an audio engineer. Whilst you may think these facts superfluous to this review, they’re not. But I’ll get to that. Sweet Heart Rodeo is her third record. So, if we’re all ready, let’s see if we can build a case for Dawn Landes.

Starting at the beginning, as is often best, Sweet Heart Rodeo opens with ‘Young Girl’, where a transistor organ vamps with a stomp-along tempo, pounded out on floor toms, in a way that recalls the garage rock of Nick Cave’s Grinderman project. It’s a good start to the record, a smart way of grabbing the listener’s attention, of making them sit up and pay heed. But it’s unfortunate for Landes as it sets the bar far too high for the rest of the album. None of the subsequent songs manage to match its urgency, or its tempo, and most of them fail to really grab in the way that it does.

The exception would probably be ‘Love’ and ‘Clown’; the former for good reasons, the latter for less admirable ones. ‘Love’ with it’s bouncing bass line, reverb soaked vocals and percussion solo ending, sounds oddly similar to Simian’s ‘La Breeze’, and provides a welcome stylistic respite from the rest of the album. ‘Clown’, on the other hand, seems to be built around the demo track from one of those keyboards you’d find in your school’s music room and sounds utterly ridiculous, with the less being said about it the better. Still, these three songs standout from the rest of the album in the way that they differ so much, are completely unexpected, the way that they present more interesting and engaging ideas than the rest of the work.

Moving onto the rest of Sweet Heart Rodeo, we find what is basically a half country, half folk album. It’s fairly nondescript. It’s a kind of twee folk/country hybrid, not so country that it would scare off the indie kids, but not country enough for the folks in Nashville; not so twee that the average Q reader would dismiss it as being too cutesy or too amateurish, but not so un-twee that it wouldn’t sit well on the soundtrack to a film staring either Michael Cera or Zooey Deschanel. It comes across as very noncommittal on the part of the artist. She possesses a pleasant enough voice; passable is a good way to describe it. It floats politely along, but it never really defines itself or sounds unique enough to really be considered as a strong indicator of why this is a good record.

Let me return to my first point – the recording engineer/being from Kentucky issue. The problem with Sweet Heart Rodeo is that Dawn Landes appears unable to commit to either side. On the one hand, it seems that she wants to stick to her roots and make a country record, yet on the other hand, she wants to put on her engineer hat and make an album that is sonically interesting. If she could resolve this contention then she could probably produce a much greater work, particularly if it relied on her studio tricks and avoided the country pull. As it is, Sweet Heart Rodeo exists in limbo between these two factors, and sounds incoherent and timid, as if it’s afraid to commit to anything strongly enough to make a focused, distinct sounding record. Sadly it settles for floundering around as a messy collection of unfocused songs and unrealised ideas.