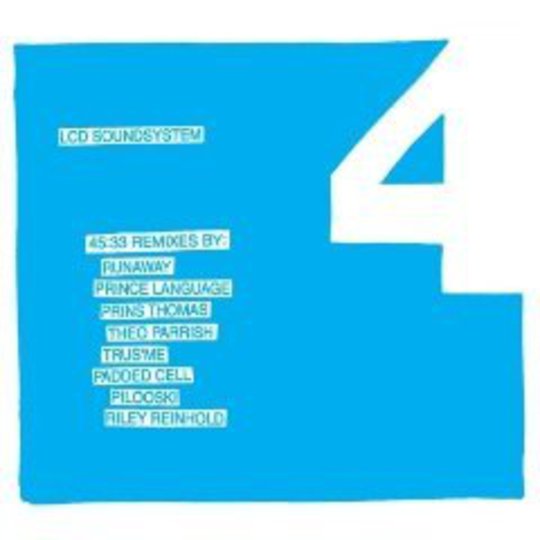 There was instantly something special about LCD Soundsystem's 45:33 when it first found its way into existence. For some, it was the changes in pace and style that ran through its never-pausing entirety, echoing genres of the past; for others, it was the excitement of hearing hints of what was to follow on Sound of Silver six months later.

Indeed, some maintain that it is the most cohesive, complete and interesting album/track the band have produced. I’m very much one of those people.

Now almost three years on, we find ourselves being reminded of what made it so great via a series of remixes undertaken by the current cream of the crop. The entire 46 minutes have been carved up into sections, remixed accordingly and reassembled in an order that vaguely resembles the original piece (across a CD or four separate 12-inch singles) – it’s the Joan Rivers of electro if you will.
So does the new format work as well as it’s forebear? Well, not really… no.

Its flaws are much like those of any other album of remixes, truth be told. Some take the source material, improve on it greatly and turn in worthwhile variations, whilst others merely tweak the tempo or struggle to add anything of their own to the equation - meaning the end result is understandably varied and highly subjective. But probably the biggest downfall of this particular collection is that four of the eight reimaginings all sample the exact same section of the record, meaning repetition sets in far quicker than it ought.

NYC residents Runaway and Prince Language get to tackle the opening movements. Runaway’s is the far more successful of the two, slower in its build up to the original bars which are encapsulated in a setting barely recognisable from their source; meanwhile Prince Language’s effort deals with the opening words sung by Murphy, looped over the upbeat glockenspiel playing, drums and analogue-synths. It’s passable, but almost identical to the section it derives from.

Which is sadly also true of the popular Prins Thomas Diskomiks remix, with the source material doing all the hard work for him and retaining near note-for-note the original’s second quarter of ethereal disco. It’s vaguely useful for anyone wanting to DJ this particular section perhaps, but not for a fan wanting to hear something evolutionary.

So yes indeed, the next the artists all tackle the exact same section, with varying results. Theo Parrish’s Space Cadet remix expands the section into a stop-start offbeat jazz breakdown - engaging in its nakedness for a while but which can’t support its ten minute+ running time; Britain’s very own Trus’ Me at least manages to add something more fluid of his own, reversing the order of the male / female vocal parts and overlaying a harder - if now slightly generic French-techno sounding - beat until it reaches a more epic finale; lastly Padded Cell vamp up the slowed-down Murphy monologue and bassline to create a far more instant affair that’ll likely go down well in most clubs, due in part to the largely unchanged final vocal outro.

That just leaves France’s Pilooski to edit the buggery out of the original, turning in a track that in no way resembles anything from Murphy’s head but more a laid back European house track, then Riley Reinhold finishing off the record with a wonderfully handled piece of minimal techno that is bordering frenetic yet altogether respectful of the original’s haunting, ambient fade out.

Whether or not 45:33 Remixes is for you largely depends on what you want from it. If dropping some sections from 45:33 into a set are on the cards, then the lovingly packaged 12-inches are highly desirable; however if you’re after a new record to ease your LCD Soundsystem withdrawal symptoms, then this probably won’t suffice, even if three or four tracks are worthy of investigation.