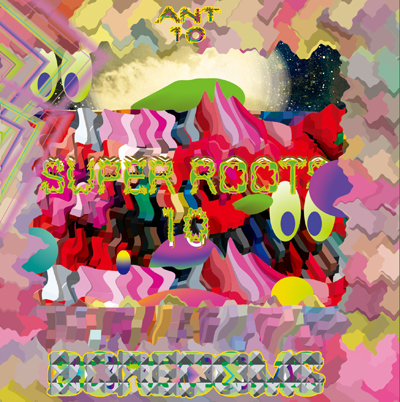 There are probably people out there, other than Boredoms supremo Yamantaka Eye, that reckon they can trace some sort of common thr»

limited to 2000 copies double vinyl set of the already sold out japanese cd. this is part 10 of the group's long-running super roots ep series. for boredoms, more is always more. over the last ten years, the band went from one drummer, to three, and then made the leap to 88. songs went from two-minutes in length to 22. comparatively, 'super roots 10', the latest entry in the band's long-running ep series, dials things back a little bit. that's not to say that 'ant 10' - the ep's single new composition - is at all austere. waves of chattering percussion coalesce into a tribal bliss-out glued together by undulating synthesizers and eye's avant-skatting. the accompanying remixes are a little more surprising, particularly norwegian producer lindstrom's take, which re-molds 'ant 10' into skewed italo-house. it also features mixes by dj finger hat and altz.
description from www.roughtrade.com