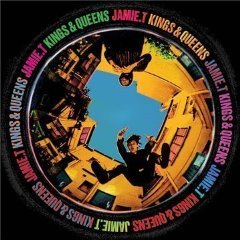 Jamie T and the Pacemakers have most certainly cemented their position as Merry Pranksters, injecting their youthful effervescence into a musical landscape that can take things far too seriously.»

some two and a half years after the release of his mercury nominated debut album 'panic prevention', jamie treays cements his status as one of the uk's most genuine and exciting young musicians with the release of his new album 'kings and queens'. it's a 43-minute, all-killer, no-filler set of stunners. the album features eleven songs. and what songs they are. short, sharp and punchy, mainly. slow, dreamy and haunted, occasionally. still pungent with the whiff of london streets and messy times, but less celebratory, more troubled and increasingly poetic, veering suddenly from the in-your-face facts of life, to cultural comedy and, inevitably, to surreal, anxious night-time imagery. it often sounds like the connection between the darkness and street violence of the early '80s and the obvious similarities to the tense, recession-hit now, as a generation of kids raised to expect abundance and money find themselves thrown out of work by obscure mistakes in distant financial institutions. nothing as direct or as dull as protest rock, you understand. just snapshots of stressed young england from a precocious talent who has quickly evolved into an acute, self-possessed artist. 'kings and queens' is exactly the album that jamie t's admirers hoped he would make... full of the gutter poetry, anger and humour of the first album. but tougher, more focused, more confident... and with even better tunes. jamie is happy with his work, and typically defiant and self-deprecating in his ambitions for it. 'i made panic prevention four years ago. if this one doesn't sound different then it's a shame. this album was a process of freak-outs, then confidence, and then just... getting through it. if this album could achieve any one thing, it would be that it forces people to fuck off and let me get on with what i do. and for people to accept that i'm not going to do the same thing over and over again. there are artists that we all trust to do that, and i want to win the right to be one of those artists.'
description from www.roughtrade.com