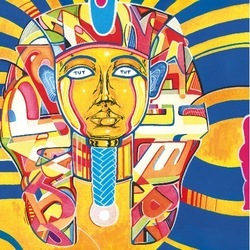 Japanther make a glorious racket, the sound of the knockabout sugary melodies of new-school punk and ska colliding with the lo-fi dirtiness of a previous generation’s approximation of guitar-based rebellion. »

japanther's always been a band of contrasts. they exist halfway in the world of performance art, and halfway in that of diy punk. they get called to compose and perform soundtracks to puppet rock operas and then do a tour comprising largely house shows. they get funded to curate huge video / dance / music shows for well known new york museums, and then release their music only via diy / independent labels. keeping that tradition of contrast alive the lads have teamed up with (crass co-founder) penny rimbaud and released a record of punk songs and poetry. on the surface, that may sound like an odd combination, but this thing is truly a wild romp 'round africa, the bronx, san pedro and brooklyn, complete with faeries, bicycles and a few cans of spray paint. japanther's infectious, free spirited trash hasn't let up a teeny bit, it's just gotten more focused and rad somehow. rimbaud's churning, clever cadence is an oddly fitting balance for japanther's two-minute blasts. the songs are consistent with the level of songwriting on their last 'skuffed up my huffy' lp. 'tut tut, now shake ya butt' was recorded in late 2007, as the (band-curated and organized) dinosaur death dance performance ran for three (sold out) nights at new york's ps122. on a special note, this record features a sleeper cover of portland's new bad things' 'dirge'!
description from www.roughtrade.com