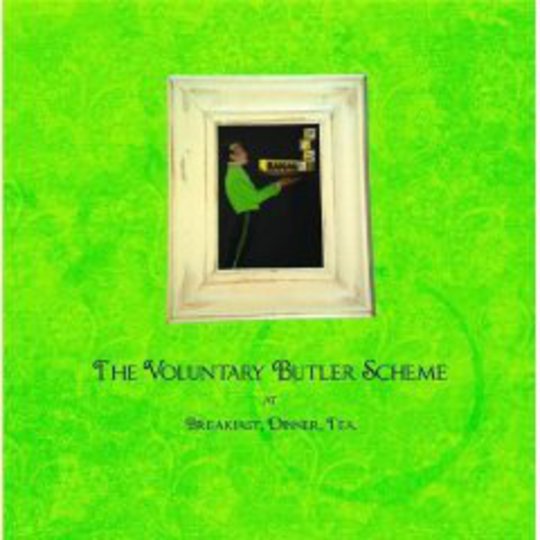 Something odd happens as the lilt of At Breakfast, Dinner, Tea's mini-curio opener 'Breakfast' meets your ears. A gaggle of clichés scramble for attention in your mind; summer fetes, cream teas, marmalade. You find yourself muttering the word 'quintessential' under your breath, despite knowing that it's basically meaningless unless followed by 'English' and used to describe something your granddad's dad would find naff. But you can't help it. With his debut full-length, The Voluntary Butler Scheme - Rob Jones to his mum and dad - has made a record that's so English it's almost painful.

Almost. Jones clearly knows his way round a good melody; in his case singsong, music hall refrains with hooks so big they'd make Paul McCartney blush. The record is positively crammed with memorable moments of the sort that rattle around your head, only to surface in the dead of night or on the train or at the water cooler at work and find themselves repeating over and over under your breath ad infinitum. However, lyrically Jones is less skilled; while often the lovelorn simplicity of his lines mirror the innocent, lullaby instrumentation of his music, his attempts at realist profundity "wear a De La Soul t shirt once in a while to make you feel more Hip Hop than you are" on 'Tabasco Sole' and his pleas that "if you were broccoli I'd turn vegetarian for you" on 'Trading Things In' verge a little too close to cringeworthily banal for comfort - certainly if you're going to be singing them to yourself for the foreseeable future.

The arrangement, while twee to the point of archness, is what really stands out about this debut. The songs are realised with instrumentation both bright and imaginative, encompassing many styles and flavours, from the stabbing funk of 'Multiplayer', the gentle slide of 'Hot Air Balloon Heart' to the call-and-response croon of 'Trading Things In'. And while on first inspection the record seems very much a vintage affair of trebly guitars, parping brass and boogie-woogie piano, the songs are infused with subtle electronic flourishes which only serve to embellish them further, rather than dominate them as can be the case with some of his solo-artist contemporaries.

Unfortunately, this brings us to the record's biggest drawback. Everything-but-the-kitchen-sink songwriting and anachronistic charm is all very well, but when held up to the current musical climate, The Voluntary Butler Scheme comes across as something of a throwaway novelty. It seems odd for an artist with such a well-formed pop sensibility as Jones, but there is just nothing really heavyweight about this debut, nothing that grabs you about the gut and shouts 'I AM YOUR NEW FAVORITE BAND!' Which is a shame.

This is an accomplished, well-formed debut that may well garner The Voluntary Butler Scheme much praise. But if you've come looking for sonic innovation or lyrical depth, this record will be something of a disappointment. Still, for fans of fun, catchy twee-pop with charm by the bucketful, there is much about At Breakfast, Dinner, Tea to love.