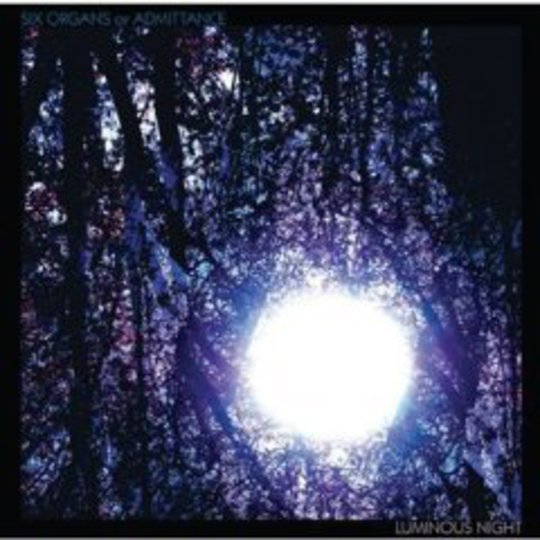 Luminous Night is the first set of new Six Organs Of Admittance material to leap forth from Ben Chasnys' cerebral cortex in 18 months, and what a joy it is. With the release of odds-and-sods collection RTZ earlier in the year there to bridge the gap between 2007s Shelter From The Ash it doesn't seem like he's been away for long per se but for serious Chasny-heads a new album is something to get pretty excited about and with his other musical outlet Comets On Fire either on extended hiatus or split for good (answers on a postcard please!).

This collection of eight songs is his best and most realised work since 2005's School Of The Flower, an album where his unique vision seemed to take a step forward in its application. At times hypnotic and otherworldly, it's a soothing, unsettling and challenging listen.

Having upped sticks from California and made the trek up to the wyrd leafy confines of Washington State, Chasny seems to have stumbled across a band of local musicians perfectly suited to his vision. With tablas, flutes, fuzz guitar and viola pushed to the fore, we're in total pysch heaven. Capturing all this psychedelic gumbo is pre-eminent underground knob twiddler Randall Dunn, who has produced and engineered some of this decades more outré releases by the likes of Sunn O))), Earth and Kinski. Set the controls indeed…

After the instrumental introduction of 'Actaeon’s Fall (Against The Hounds)' we’re plunged into 'Anesthesia' (Chasny's spelling not mine), a simply astonishing song up there with the best anything the man has done. Woozy and somnambulistic, the song almost drags, but the pace is strangely hypnotic and the effect is soothing as Chasny intones "I’m a vengeful man" as the viola swirls. Wow. This is a contender for song of the year in this house. This is the musical equivalent of one of Brion Gysin's whirring dream machines. Stare into the heart of this.

'Bar-Nasha' harks back to the open-tuned drone of 'Shelter From The Ash And The Sun Awakes' with its descending fuzz guitar riff playing off the tabla percussion of Tor Dietrichson.

The curious side one closer 'Cover Your Wounds With the Sky' is like an Eno-esque ambient stew; the sleeves notes state this was recorded using 'electronics' and 'buried/excavated tapes'... ok, but with chiming piano motifs and keyboard drones, it's again disconcerting and eerily beautiful.

'River Of Heaven', another instrumental, pushes the soundtrack feel to the edge whilst 'The Ballad Of Charley Harper' sees the fuzz guitar overdriven to the max. Final track 'Enemies of The Night' begins broodingly with malevolent vocals before it descends into a freeform guitar battle that disappears into the ether.

At just 42 minutes and eight tracks long, it's an album of the old school, suited to listening in one sitting. Can you manage that? Chasny is heading further and further out there, deeper into the woods. We’re all playing catch up. Long may he run.