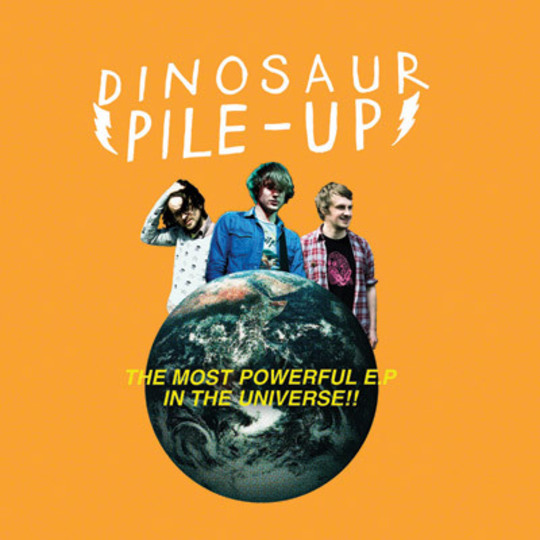 Yorkshire really has been spoiling us musically this year. Releases by Grammatics and Blue Roses, to name but two, have both been critically acclaimed, while this month saw oddball quartet Wild Beasts come of age with second album Two Dancers.

Dinosaur Pile-Up may not sound anything like those mentioned above, but their mindset appears to be the same, in that they’ve chosen to ignore many of the more voguish noises around them. In fact, they seemed to have ignored any noises made around them since the mid-Nineties. This five-track EP is a playful beast that deals in pogo chords, infectious guitar hooks and the sort of wonderfully dumb melodies that rattle around in your brain long after you’ve finished listening. Unsurprisingly for a band whose lead singer claims to listen to Foo Fighters' first two albums daily, the influence of Grohl and co falls heavily on The Most Powerful EP In The Universe!!. Third track ‘Cat Attack!!’ wouldn’t seem out of place on the Foos’ debut; the chug-chug of guitar and vocals give way to the sort of searing energy that defined their early releases, and are now beginning to do the same for the three-piece we have before us.

Lead-off track and highlight ‘Summer Hit Single’ threatens to jump right out of the speakers and through your skin, causing the sort of leaping around normally reserved for recipients of stern electric shocks. Something my bedroom still hasn’t recovered from. It’s a four minute pop nugget that takes in an obscenely catchy arpeggio hook, a verse that threatens to bob your head right off, and a feedback-laden intro to a chorus that just begs singing along to: “I’ve been waiting, hibernating, contemplating being gathered underground”. Thoughtless, addictive, complete.

Obvious maybe, but at this point it’s necessary to mention Nirvana and grunge in general because, as you may have noticed with Dinosaur Pile-Up’s previous releases (lest we forget April’s sublime ‘Traynor’), they go hand in hand. The by-now done to death quiet-loud-quiet-loud pattern heard on ‘Opposites Attract’ is signature grunge, whilst closing track ‘Beach Bug’ contains the kind of primal drumming that Dave Grohl (there’s that name again) made his hallmark. Lead singer Matt Bigland doesn’t spit his lyrics with the same venom as Kurt Cobain though; he’s not an angry man. If naming a band after a film sequence involving several Brontosauruses fall over a cliff doesn’t tell you this - never mind the name of this EP - then the five tracks on offer here are proof - this is grunge that’s FUN. The three-piece veer towards uplifting pop territory than dark angst and in this sense share a lot with Americans Weezer (listen to ‘Melanin’ and tell me that it wouldn’t fit in anywhere on the ‘Blue Album’). Bigland’s voice at times follows the same wearily laidback but very warm tones of Rivers Cuomo.

So Dinosaur Pile-Up then; attempting to revive grunge revivalism for the first time on these shores since Nine Black Alps had a stab at it in 2004. The flaws that stuck out then will remain the same now; there’s nothing clever here, anyone seeking broadening horizons will be routinely disappointed. It would be harsh to call Dinosaur Pile-Up a straight up pastiche, but the debt they owe to Foo Fighters, Weezer et al is undeniable, and this is a reasonable enough justification for disliking The Most Powerful EP In The Universe!!. But for those of us who fancy a bit of a break from listening to perfect female vocals singing over Korgs and synthesised beats (Florence, La Roux, Little Boots), or who fancy listening to something where you don’t have to work out whether you have to understand it as art to enjoy it (Sunn o))), Animal Collective) Dinosaur Pile-Up are it. There is nothing to understand here, no memo to follow, just three chaps who enjoy making a damn good racket and would rather like you to get involved too. Simple enough?