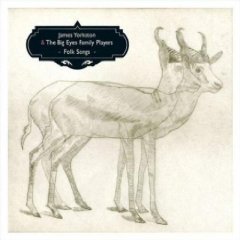 In the course of dutifully checking some dates pertaining to James Yorkston’s back catalogue, the man’s Wikipedia entry alerted me»

james yorkston returns in the company of the big eyes family players with a new album of traditional songs from the length and breadth of the great britain and ireland, and one tune from galicia in spain. after a decade which has seen folk music morph into nu-folk, mobile phone-ad folk, mortgage-folk, smoothie-folk and so on, yorkston has reached back into the tradition of song and place and drawn a line in the sand.
description from www.roughtrade.com