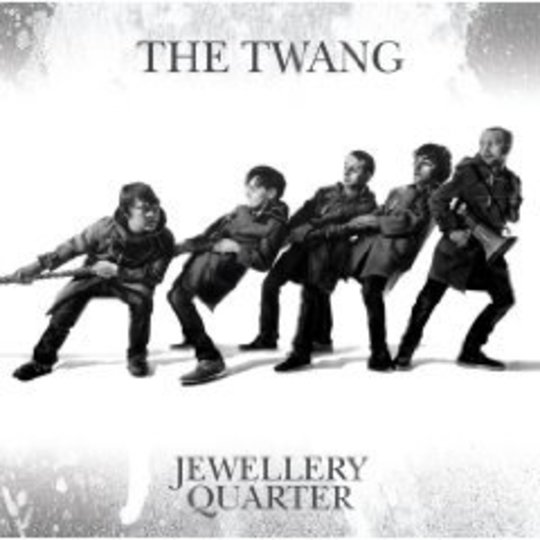 It's Jewellery Quarter, by The Twang. They’re well lairy, right? Like Oasis, yar? Like Ocean Colour Scene, mmm-hmm? Didn't they try to date-rape the NME once? Can I fathom opinion enough to write a review of them? Can I?

Wait: HELLO TWANG FANS. PLEASE DO CALL ME A POOR EXCUSE FOR A HUMAN BEING, PURELY BECAUSE I’M NOT ECHOING YOUR OPINIONS. I OUGHT TO BE ASHAMED OF MYSELF. Wait again: I AM LISTENING TO THIS ALBUM BECAUSE I'M GENUINELY CURIOUS. I just wrote this in capitals in case you skipped to the end only to skip back to the start again, which you did, right?

I'm going to start with some opinion on ‘Answer My Call' (my album highlight), which is pretty alright actually. You heard, I said 'alright'! A track by The Twang just got called 'alright' by a writer on DiS. But hold on, that's not the end of the review. 'Alright' is pretty much the worst that could happen. It means passable, not bad, ok, acceptable, tolerable... Keep saying those words of mediocrity and you'll succumb to a life of horrible, purposeless apathy. The fact that this album isn't wank is actually the opposite of relieving. What is the fucking point?

“I know I'll be alright/if you set me free” is a choice cut from opening track 'Took The Fun'. Listen up: I don't write in clichés and I hate people that do. There's a cowbell thrown in here out of sheer desperation to make the track sound interesting. There seems to be some sort of secret desire (hell!) to turn it into a steel-drum/panpipe extravaganza. To mask its pure greyness, perhaps?

Pre-amble #2: I like music. I want to be challenged. I crave that want-to-hear-it-again nag, the one that incessantly hammers at my ear on the fade-out so much that I end up hating it. The ponderings: "How did they write this?"/"Gosh, this is stark"/"Wow, I wish I could do that". Yeah, it IS about that. It absolutely is about me wanting to feel inferior. Is that perverse?

Or the alternative: Isn't this what everyone wants out of life, let alone music? Perhaps with less of the not-so-secret desire to feel inferior. More importantly, who can possibly want the only lingering question to be whether a person has written an LP in anything other than jest?

And so we continue, to 'Barney Rubble'. It's pure mundanity. The lyrics whinge about what their protagonist should've done. WELL WHY DIDN'T HE JUST GO AND BLOODY WELL DO IT? Easy enough question, really. Lyric example: “It's this repetitive nonsense that brings her down”. Isn't that ironic.

Quick-and-necessary-mention-of-the-music-itself 1/1: there are three notes repeated on the bass, a note-ambit of about five semitones in the vocals, a completely predictable verse-chorus structure and the odd peppering of cod-gospel thirds, but that's kind of it. Can I tell you anything about what they make me feel? No. Can I say I have any sort of reaction to them? Again, no.

“The really pointless stuff about life, like rain. Oh hold on, shall we write a song and use it as pathetic fallacy? Yeah?” I'd like to imagine Phil Etheridge, frontman of The Twang, having this conversation with himself. If it was conscious, I'd maybe even garner a tiny spot of interest.

“When I said I liked you/I really meant it” - a lyric taken from 'Encouraging Sign'. It also serves as a sample of why this album is like listening to someone you've bumped into unexpectedly, that friend-of-a-friend's friend who can liquidise even the most interesting person into reconstituted soup.

Back to 'album highlight' (yup, really) ‘Answer My Call’ - there’s trumpets and everything. It's the equivalent of listening to yourself on a C-90 talking French in a Brummie accent unironically. And again, I can offer nothing more than a recollection of my observations. Why? Because I get absolutely no further in the process of extracting meaning from it even on a second-try.

I'm sporadically throwing awful analogies into this review in the hope that they make you cringe. Especially if you're a fan of The Twang and are already turning a shade of red-to-a-bull in response to my superiorised warblings. I want you, the reader, to partake in a new thought process; I want you experience two seconds whereby you wonder “what do those words mean?”. Patronising, me? Never. I don't even mean it like that. What I mean is this: Don't you want to think? Don't you enjoy thinking? Or do you instead prefer listening to background whining? Are you happy to settle for this? Do you not even consider the alternative?

WOAH. MUST CALM DOWN. Think of the ocean.

Look, there's those of you reading this 'cause you've found it via Google. There's also some of you here that probably have Google Alerts switched on 'cause you're that fanatical about this band. Presumably there's some DiSers here just looking for a piss-take. The latter was never going to be the case – I came into this open-minded. Just reiterating that from earlier, remember? Truth is that I've not heard the debut album and didn't really know too much about this band. I knew they'd been hyped but had no idea why. I wanted to find out more. Part as expectant-sadist, part out of genuine curiosity.

Was it worth it? Yes, if this inspires anyone to listen to something better than this. Music as escapism is one thing but you might as well watch your pet slug try to form a crop circle in Central Park if you want to be this uninspired.

I could go on and reference every single track, asking myself why The Twang's Jewellery Quarter is enticing to a single soul, but I'd just repeat and rehash and rejig over and over and over. I'd get bored and a significant proportion of you guys would leave. And therein lies yet another parallel.

Closer #2: these aren't the songs of an inarticulate brute, instead far from it. The points come across in lucid form, it's just that there's absolutely no purpose to them. Back into my mirror-laden hole I crawl...