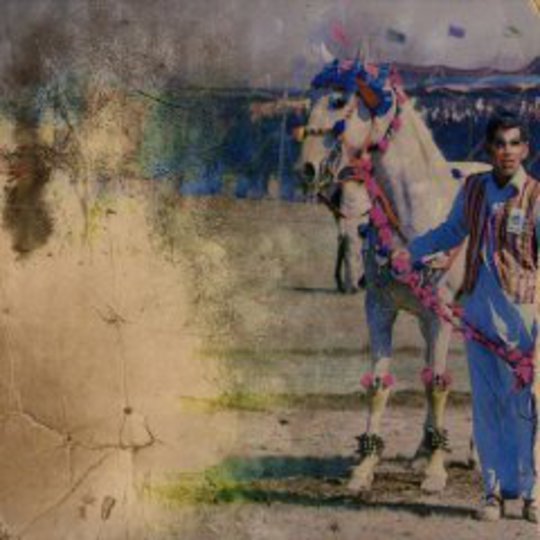 Three minutes and 45 seconds into this record, you’ll know whether you love Kong or not.

By then you’ll have experienced a ridiculously tight and avant-garde instrumental intro, a vaguely hypnotic noise representing vocals, and a stripped down guitar / drum face off. You’ll be starting to understandably ‘think’ that you’re getting a rough idea of where ‘Leather Penny’ is heading, when all of Hades breaks lose.

If a scream could shatter glass, the noise that ensues is that wail. If a guitar solo could represent a riot spiralling out of control, this would be that twisted instrument’s output. If a record could find another level to take itself to when you’d thought your speakers were at their loudest, then this is that freakish aural oddity.

Welcome to the world Kong live in.

It’s not really like our world. We have faces and language and eardrums; Kong have mere remnants of these. Somewhere under the scary masks and scarier matching red outfits are three men fighting complacency and musical preconceptions via dry humour, experimentation and a whole lot of noise.

With each repeat listen the fragmented rhythms - which initially seemed dysfunctional and obscure - meld into a coherent whole. Words like ‘bell’, ‘bumhole’, ‘seven’ and ‘litigate’ drift in and out of focus; drum patterns start to make sense, shortly before they spasm into another form entirely. After days, the odd tune even begins to appear. And with each rotation, Kong lay claim to yet another small part of your entity.

Like almost any band, their sound owes a slight debt to bands already selling their wares. Largely due to the way the guitars have been tuned and the desire to experiment with unorthodox timings, Shellac are their closest neighbour. But their ability to play around with vocals, devolve their songs into the kind of insane wig outs Lightning Bolt thrive on and have that sub-layer of noise reminiscent of Jesus Lizard and Mudhoney at their best means that Snake Magnet is still an album that only Kong could have made. And it’s one that’s also more viscerally exciting and playful than anything that any of their peers have produced in the last decade or so.

The only things that stops it perhaps entirely running away with 2009 is the fact that many of these songs have been around for a good year or so now - especially the more ‘instant’ tunes such as ‘A Hint of Rennit Innit’ and ‘Blood of a Dove’; that and the sheer relentlessness of the beast. In some senses that second point is one of the album's strongest assets, as when it drops the onslaught briefly for a slightly indulgent ‘Good Graphics’ and lengthy five minute intro to the aptly named ‘Long’ you miss the mayhem, yet conversely this isn’t an album you’d likely put on in the background. It’s a record that insists on your full attention. And when a band has songs as cleverly pieced together as the three pronged attack that is ‘Wet Your Knives’ or the freakishly deformed ‘NIH’, your attention is the very least that Kong will ensnare.

Breathlessly loud, startlingly daring, intentionally different; Snake Magnet is not for those with no sticking power or love of rock at it’s most blisteringly raw. But after experiencing the frightening world that Kong have created, almost anything else feels strangely mundane and anaemic.

Three minutes and 45 seconds into this record, you’ll know whether you love Kong or not. And by god, you ought to.