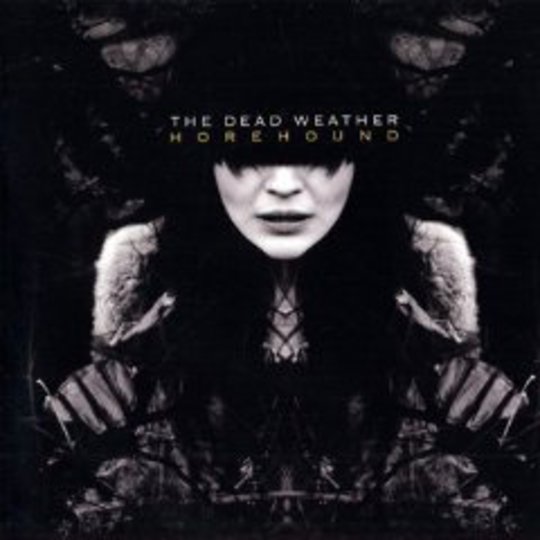 A combination of a prolific workrate and that ever-present punk rock guilt goes into the debut album by Jack White’s newest band The Dead Weather, which arrives with limited advertising and almost no pre-release performances, roughly six months after the quartet formally assembled. The result of a phone call between White and Alison Mosshart, singer of – can we say – post-White Stripes outfit The Kills, White’s Raconteurs bandmate Jack Lawrence and Queens Of The Stone Age keyboardist Dean Ferita make up the foursome.

The Dead Weather wouldn’t call themselves a supergroup, of course, but nor would anyone else, so let’s run with it. It’s comparable to – pretty sure Jack would appreciate this reference – definitive supergroups like Blind Faith, or later equivalents such as Electronic or even A Perfect Circle. The results differ enough from the participants’ previous efforts at their day jobs for the listener to believe that this does indeed represent a fresh start or a clean slate or what have you; and yet it sounds sufficiently similar that to be assured this is an essential creative sideline requires a fair bit of, ahaha, blind faith. Horehound is, after all, a garage-fuzzy blues-rock LP with a hard rock heart and the odd bit of wonky experimentation. With that in mind, let us speculate that Jack White fancied a crack at playing drums on an album (which he does in some style, one that will probably cause people to deride the abilities of Meg White once more) and that Alison Mosshart wanted to work with one or more people who were a bit more talented than Kate Moss’ boyfriend.

Horehound is the first album to have been recorded at Third Man, Jack White’s Nashville studio space. White being a noted gear obsessive – The White Stripes probably remain the highest profile clients of London’s analogue haven, Toe Rag Studios – ‘60 Feet Tall’ is a curious opener, insofar as it could hardly be described as lo-fi, yet the plethora of dubby, aquatic FX behind Mosshart’s vocal serve to obfuscate and muffle the tune contained within. (These wobbly dub nods are revisited later on during ‘3 Birds’.) The gears of an archetypal blues-rock solo grind into life, but it vanishes almost as quickly. It’s not a bad song, but it does suggest The Dead Weather were keen to bowl their audience a spinner from the get go.

White is given no songwriting credits on this track or its followup, Horehound’s leadoff single ‘Hang You From The Heavens’; Mosshart and Fertita share the honours for both of these, and indeed if ‘Hang You…’ had appeared on pretty much any Kills release it would have scarcely seemed out of place. ‘I Cut Like A Buffalo’, meanwhile, is exclusively White’s baby, and his peculiar, jivey vocals are carried along by grimey Hammond organ that, depending on one’s age and upbringing, is most readily associated with either Sixties funk records, or the interval music at ice hockey games. It’s enjoyable but corny, which is hardly new territory for the fellow.

The Dead Weather have wasted no time getting their teeth into some choice covers, their two singles to date going at Gary Numan’s ‘Are ‘Friends’ Electric?’ and ‘Forever My Queen’ by doom metal progenitors Pentagram. For this record, though, Bob Dylan’s ‘New Pony’ gets the treatment; a song from 1978’s Street Legal album, it’s not likely to be anywhere near the forefront of most people’s minds when they ponder Bob’s most seminal moments, but the world doesn’t need any more covers of ‘Like A Rolling Stone’ (or whatever). More importantly, it’s possibly Horehound’s most exhilarating moment, thanks to some overinflated desert rock bass and guitar that sounds locked in that just-plugged-in moment of static shock.

The White Stripes’ initial burst of hype in the UK found them effortlessly collecting fans who, previously, had neither known nor cared about their grounding in Detroit garage rock and the Sympathy For The Record Industry label. Later on, they switched it up and made music rocking enough to meet the approval of people who might, circa ‘Hotel Yorba’, have dismissed them as flimsy quasi-novelty flashes in the pan. It’s hard to see how The Dead Weather might do something similar with this album. Its creators will surely insist that they’re proud of their work and that’s all the approval they need. All the same, it’d probably be nice for them if you could imagine anyone who didn’t already like The White Stripes and/or The Kills buying this.