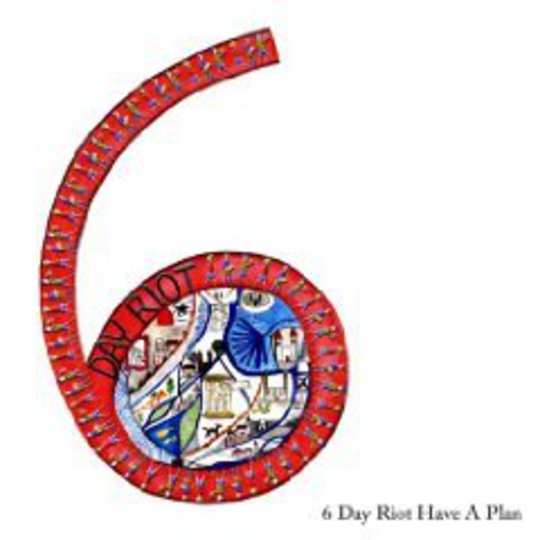 For anyone bad with numbers, like myself, 6 Day Riot can be a bit tricky. Are they a trio? Or is it a quintet? Do nine musicians really play on the album? The short answer is d) All of the above. 6 Day Riot's current incarnation is a six-piece led by the plucky Glasgow-born singer Tamara Schlesinger. Having been through the wringer (specifically, having to recast the band on the eve of a huge trip to NXNE Festival in Toronto) to make it to this album, it’s no wonder 6 Day Riot's debut can be easily summed up as 'eclectic'.

The one thing that I can really wrap my head around is that 6 Day Riot Have A Plan. After all, it’s the title of their debut album, and it’s clear they spare no time for nonsense, no time for tomfoolery. The first song on the album is also the single, but more importantly, it’s the undoubtedly the best song. 'Run For Your Life' has all the elements that go into making a sublime tune for summer. It’s got a pinch of the newly popular Afro-beat; it’s got the attitude of a stern message, almost a call to arms; and the wonderful string section to build the infectious melody. But the song’s real strength is Schlesinger’s voice. ‘Run For Your Life’ really showcases her very clear, incredible tones that sways between being emphatically feminine and packing an emotional punch in same dreamy vein as Harriet Wheeler’s.

The early album songs, most especially ‘O Those Kids’ and ‘Every Third Sunday’ are excellent. ‘O Those Kids’ is kind of schizophrenic, jumping between the finger picked guitar that is engulfed by Tamara’s voice and the pop-folk section driven by the horns, but ultimately it comes together quite nicely with the addition of strings. ‘Every Third Sunday’ could be a Mumford and Sons song but with the added bonus of horns. It’s a little stop and go between the flow beginning and the fast, small breaks, but the rest is folky-Spanish guitar gold.

6 Day Riot can smoothly fit into a plethora of stylistic boxes… Indigenous folk, klezmer, carnival, Eastern European gypsy swing, or sensible pop that is bluegrass tinged. And they may well be all those things in fleeting moments, but what transcends those labels is the fresh perspective of 6 Day Riot. They possess fun, sunny straightforward elegance that shines through and makes what might have been a forgettable album a must have to make the scalding hot summer melt away into a crisp, sublime world that 6 Day Riot create.

There are a couple mid-album slow points, but the lower end of the record is never that low due to the tender, expressive quality of Tamara’s voice that allows you to be drawn in and wrapped up and kept warm. So while some songs (see 'Be With Me' and 'Rise Above') may not hit the same summery highs that others do, they’ve still got an encapsulating, inviting quality to them.

The winding down of the record is just as good as the start. ‘So You're A Writer’ ends up being a Spanish-y, calypso-y song that kind of melts into an epic (if you can even call at song that clocks in under three minutes) Carpenter-esque sing a long of “Riiiiiide”. I wanted to write that it was ironic to title such a good song 'Breakdown’, but unfortunately it is a break from the remarkable: it’s got a nice violin part, but it’s just that, nice but not striking.

Fortunately ‘Long Slow March’ is a fantastic way to wrap up an electric, charged album of excellent folk-pop tunes. It’s got the Spanish guitar; it’s got the horns and the violins that they so elegantly executed on the rest of the album, showcased all in one song. It’s almost a wistful bow that each member of 6 Day Riot takes to say, “Thanks, it’s been fun”. That it has.