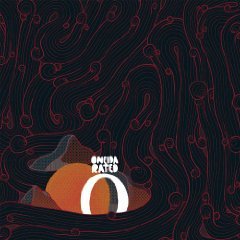 welcome to 'rated o', the triple album and second installment of oneida's much-anticipated 'thank your parents' triptych of releases. in august of 2008 oneida released the first installment, 'preteen weaponry', and now, 'rated o', the centerpiece of the 'thank your parents' trilogy, has been bestowed upon us. why a triple album and a triptych of releases? fat bobby explains: you know, you deserve more than the typical oneida glib / enigmatic muttering - so let me weigh in just a sec on 'thank your parents', 'rated o', etc. it's like all over part one of the trilogy, 'preteen weaponry', especially as you come toward the end, there's this tension with organic vs synthetic shit - we're playing that music, but it can feel kind of uncomfortable (ha ha, we saw a review that compared it to goldie!) when you don't exactly know what's what - there's a reason we've got organic and synthetic shit going on on the stage, right? so envision the end of preteen, that rippling, deep robot vibe that's just kid playing, and a little organ drone, but how certain are you...and then brownout drops, and you're deep in electro-land...except we're fucking playing the music on 'rated o', you know? hell yeah we 'use the studio as an instrument' (ugh, gagging on kevin shields-ish cliche there), but it's not like we're looping or sampling - we created that music, from dust and wind and sweat. yeah, we dubbed out the three full takes that mc put on brownout, just throwing a few choice moments on (in case you care, his name is dad-ali ziai and he lives in santa cruz), and going for broke on the whole crazed 12" b-side vibe, but that's our music. you know i love hip-hop and other constructed / collaged music, but that's not what the thank your parents world is - this is straight up prince, lee perry, beatles shit. it's not like it's all live in studio, some of it's built in layers and takes, some of it's dubbed and dropped and filtered and massaged, but it's oneida walking the dog around the block, and if motherfuckers can't take what's on the other side of their block, they should never have left the house. as the label representatives, perhaps the sub-sub librarians of all things oneida, let us step in and clarify what an excited and excitable bobby matador is trying to say above. oneida has delivered a monster named 'rated o' which happens to be the crowning achievement of their storied creative lives. by producing this colossus they have also created the necessity of its destruction - which within the confines of this tremendous accomplishment - they do so handily and with utter fluency. perhaps 'rated o' represents the encyclopedic representation of oneida music, oneida creativity and oneida insatiability. as the leviathan rises from the murky depths to endow the idle watch with illusion, disillusionment and mortal terror - thus oneida leaves a hieroglyphic spume upon the glassy surface of what is known and unknown. the music contained within the covers of 'rated o' must be seen as a gifted wilderness that when traversed will grant the traveler both a fractured mirror and a demolished and worried pathway deeper into the abyss. this album is an attempt to contain the entirety of oneida and thus it points the way to infinite rebirth and boundless creativity. it is a finite map and the suggestion of unknown worlds. we finally have in our hands the album that oneida has often gestured towards. ladies and gentlemen, this is one of the greatest triple albums ever recorded. for the recording of 'rated o' the band expanded to five members, adding longtime brahs shahin motia and barry london to the regular lineup. motia has been performing with oneida for several years; london is the sound engineer who has recorded the last several oneida albums and is chief brah at the ocropolis (oneida's brooklyn recording studio). long live the o!
description from www.roughtrade.com