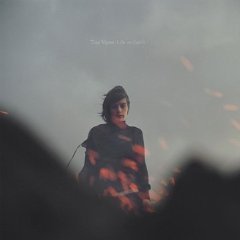 Vincenzo Natali’s 2003 film Nothing takes its two central figures, Andrew and Dave, and positions them in a characterless white vo»

seattle. since her last and first album, 2007's 'hands across the void', she has been back and forth across europe, on tours into and through the united states, transfixing audiences into a solemn hush. transcending the mere folk tag, fortino draws from disparate inspirational sources, from the avant-garde or from country musician townes van zandt. recordings for the new album began at home and were then interpreted by andrew hernandez in a classic analog studio in austin, tx. retaining both the glow of her work on guitar and the strength of her voice, hernandez has captured the organic nature mirrored in the concepts of the album. 'life on earth' gives musical life to those themes that inhabit her lyricisms: love found and lost, places come and gone. the future annihilates the past, consuming it like a fire. a shining hope permeates the threat of doom here. desperation fades and leaves you free in the end.
description from www.roughtrade.com