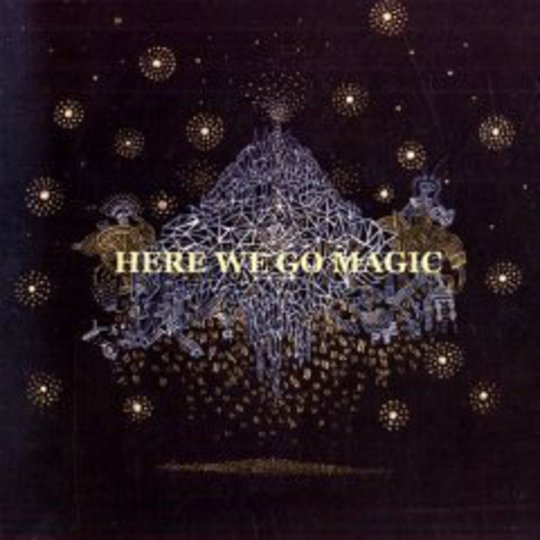 It’s hard to gauge what qualities a pseudonym possesses that can so unshackle an artist from their original persona and thrust them onto experimental plains they’d previously not dared alight upon. Moreover, the effects of these pseudonyms make for varying results. Some jump at the chance to expand their musical arsenal; last year saw Gruff Rhys successfully leap forth from the good ship Super Furry Animals headlong into a pool of trashy synths, Eighties disco-pop and stories of John DeLorean in the form of Neon Neon; whilst others enjoy the apparent light-hearted and less pressurised climate that a pseudonym can bring (Condo Fucks anyone?). For some though, it’s an opportunity to take what they already know and extend it into a realm that they perhaps wouldn’t contemplate in their daytime guise. Pop-folk singer/multi-instrumentalist Luke Temple and his creation Here We Go Magic seem a prime example of this.

If debut LP Hold A Match To A Gasoline World saw the Massachusetts-born songwriter noodle his banjo through folk imagery, with Snowbeast (2007) adding synth and keyboard to the formula, then for this effort the clue is in the title. Here We Go Magic certainly doesn’t give the implication of any great overhaul to Temple’s style, nor suggest any great fanfare to the direction he’s now taken; and so it proves as the album starts. The clip-clop, afro-beat of ‘Only Pieces’ casually appears and gently nudges itself into the conscience as if it’s been lying there dormant all the time.

As with Snowbeast, Here We Go Magic was recorded on four-track and provides both a strong link and great variation to Temple’s previous LP: the lo-fi production is again a constant factor throughout, and is the canvas from which the album hangs. There seems though to be an attempt to fit as many different textures as possible into its diminutive frame, resulting in occasional moments of brilliance. ‘Fangela’ fits in somewhere with Graceland-era Paul Simon: Temple’s almost other worldly high-pitched vocal tones drift over a hazy myriad of acoustic guitars, fumbled rhythms and glittering synths that find themselves complemented by the hissed production. The smudged sound provides an extremely down to earth feel, as though its creator is fearful of allowing the lazily meandering layers to completely wrap themselves up in their own hubris. ‘Tunnelvision’ ,meanwhile, is a simpler proposition, a stoical but far from overbearing percussion works in tandem with chugging acoustic chords and contrasts with vocals that push and recline to and from the foreground, before the whole mirage fades like it was never there. It’s another example of the artist refusing to discard his folk-leanings, instead building additional blocks on top (and in case the obvious Animal Collective comparisons haven’t been made yet, they are there. Temple goes so far as to employ the New York-based group’s “wait, are they saying what I think they’re saying?” vocal tactics on the lightly-burbling ‘I Just Want To See You Underwater’.)

Ironically, where ‘Here We Go Magic’ does come a cropper is when Temple really strives to push the album onto another plain. The Cryptograms-reminiscent walls of noise that lie towards the back of the album sit uneasily alongside the rest of its content. It seems that in creating the soundscapes of ‘Ghost List’ and ‘Nat’s Alien’, the singer and multi-instrumentalist tries too hard to paint the dreamlike atmospherics that he’s already succeeded in doing elsewhere without even trying; such tracks are too blatant an attempt to label the album’s ambience when there’s no need to do so. A far better sense of the album’s phantasmagoric intentions lies in the delightful Nilsson-esque shuffle of ‘Everything’s Big’: an accordion-backed ditty that turns almost full-circle back towards Snowbeast.

Despite these flaws, Here We Go Magic still makes for a compelling listen. Temple sets out to tinker with rather than drastically disfigure his familiar surroundings and for the most part succeeds, with occasional flashes of casual brilliance. That these flashes occur with minimal fuss merely adds to the enjoyment. I suppose it’s only magic after all.