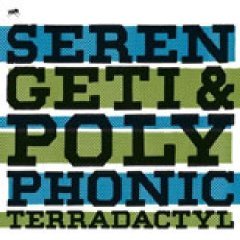 According to the press release for Terradactyl, the record is all “...about place – losing place mostly, struggling to find it aga»

illinois natives serengeti and polyphonic's 'terradactyl' is an album about place - losing place, mostly, struggling to find it again, and succumbing to the fact that it's cold, and surprisingly lonely, when you're dressed in the human condition. serengeti, heretofore a master of on-record character acting, appears here as his most vulnerable self and as on this duo's 2007 debut, 'don't give up', world-ly beat-maestro polyphonic is on hand to make beauty out of so much madness. one of the album's best tracks 'steroids' features adam 'doseone' drucker. in a madvillain moment, serengeti is run-on gritty in the third person, telling a surreal tale of escapism and mistrust, while polyphonic's all harmonica jazz-snap groove. as the music surges into crazy land, the erstwhile voice of subtle and themselves executes a decidedly buff verse.
next, 'patiently' finds geti's words blown out over big bass and digital bits, while on 'call the law,' he manically skewers the black rap male stereotype. geti trades lines about love with another legend, buck 65, on the dank and dubby 'la la lala,' and 'my patriotism' continues the odd upbeat bent, where atop sampled squeeze-box and a live mandolin mimicking african highlife, geti lays everyman verse: "winners win and raise hip kids/ poor people? day-gigs for the rest of your life."
description from www.roughtrade.com