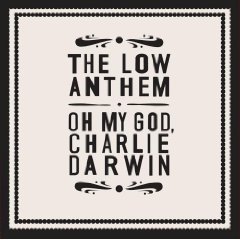 Just as Tom Waits has the power to infuse you with familiarity with the return of a chord, so do the songs of Oh My God, Charlie Darwin, like an embroidered pillow on an old porch that says ‘home sweet home’. »

last few copies before it gets released uk on bella union. the band are playing every festival and uncut, mojo etc are all over them. limited and exclusive copies of the original hand made, numbered, us edition... get it while you can. the new long-play offering from providence, rhode island, based trio the low anthem explores changing times, places, love, and loss over the course of its 42 minutes - sonically superior to their debut outing, the group has also built upon their songwriting, starting with the album openers 'charlie darwin' (a beautiful track, featured on our own counter culture 08 compilation) and 'to ohio' - both quiet mood setters, they lay the framework for what is, mostly, a haunting, late night mix of tunes featuring sparse, organic instrumental arrangements and wonderful harmonies - that is not to say that the album is one dimensional - on the contrary, the bar-room stomp of 'the horizon is a beltway' and 'champion angel' serve well to keep things varied, offering a growl one wouldn't guess to be coming from the same voices and interrupting the album's lullaby with an abrupt jolt.
description from www.roughtrade.com