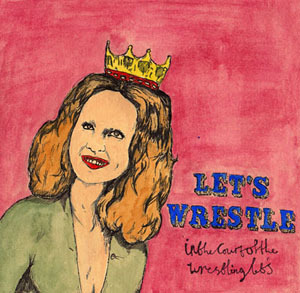 Let's Wrestle - In The Court Of The Wrestling Let's

If their first full-length has taken the art and craft of the three-minute guitar-pop song as demonstrated, then is the only way up? It'd be a saddening thought to think that Let's Wrestle have peaked already.»

rough trade exclusive with bonus cd of let's wrestle covering 5 fellow stolen recording artists - mathew sawyer and the ghosts, artefacts for space travel, tap tap, screaming tea party and pete and the pirates. 'in the court of the wrestling let's' is the debut album from the youthful, shambolic and endearing let's wrestle. it was recorded in a basement in whitechapel underneath the only ukulele shop in europe and released by the ever impressive stolen recordings. the 16 track album (including 3 interludes) has everything you'd want from a let's wrestle release - that certain english charm, hooks that would sit perfectly on a buzzcocks release and that magical yet slightly out of tune vocal that only dan treacy from the tv personalties and nickki sudden from the swell maps have perfected in the last 30 years. singer, guitarist and lyricist wesley crafts urban learesque pop punk ecstasies about - a woman inside your head with no face that you are in love with, getting a job so you can buy girls drinks at clubs, how bass player mike lightning's hair looks like princess diana's from the point of view of a homosexual man who is in love with the dead princess, a really famous crack addict and the elderly people of frinton on sea. 'in the court of the wrestling let's' is a young, exciting, ramshackle and much loved album here at rough trade shop.
description from www.roughtrade.com