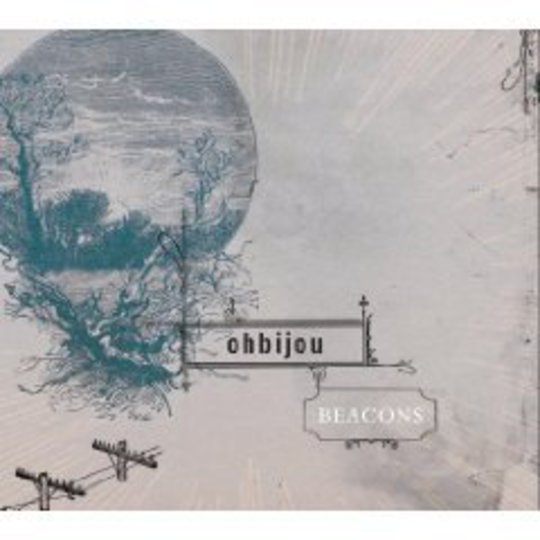 For a few years now, it has been a widely-acknowledged fact/cliché that Canada has lately played home to a disproportionately high number of bands who are gently crafting elegant baroque pop. You wonder what they put in the water over there. Or perhaps the sneaky beggars did a surreptitious deal with Old Nick to make ‘Canadian’ such a rich and identifiable sub-genre.

Whatever means they employed to nurture such a handsome crop of bands, they’re still creaming off the dividends. Ohbijou is a case in point. Having started off as the solo endeavour of singer Casey Mecija, the band have gradually snowballed into a seven piece, and in this shape they arrive with their second album Beacons.

Although it’s a full band piece, on first impression Beacons appears to be little more than a vehicle for Mecija’s beautiful, delicate voice. Scratch the surface, and it becomes clear that the whole album has been painstakingly assembled piece by piece like a ship made from matchsticks, with Mecija’s voice being draped gently across a framework of lovely cello, piano and guitar. The gentle hooks gradually snare you further with each listen, like a more sedate Land Of Talk (Also Canadian, naturellement).

Of course, the fact that it is so lovingly crafted does not automatically make Beacons a good album. What does make it a good album is its emotional impact. It’s actually a little difficult to get past the loveliness of the vocals at first, and focus on the songs themselves, but once you do, it’s difficult not to be moved by the plaintive romanticism therein.

The album finds its emotional centrepiece in its sparsest song, 'Thunderlove'. The strings are dropped down a notch and we are left with just Mecija backed by a simple acoustic melody, delivering the song’s opening couplet in typically heartbreaking fashion, "Give me some loving / ‘Cos I’ve been thinking about dying under heavy snow".

Very occasionally, Ohbijou emphasise the orchestral element to their sound. 'Black Ice' and 'New Years' are both stirring examples of the impact they can make when they crank things up even a little bit. There are other instances (albeit scarce ones) where Mecija really casts off her inhibitions and her little girl lost voice soars into something more powerful. It’s perhaps a shame they don’t submit to these urges a couple of more times, because it might stop the album from running out of steam a little towards the end. It could also infuse a splash of variety and lift Beacons from being a very good album to a great one.

That said, there’s no denying that this is a beautiful, warm record. Ohbijou might not have made their classic yet, but they’re on the right path.