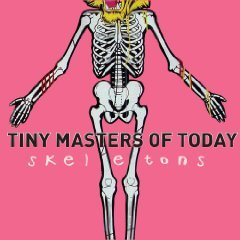 TMOT's first album, Bang Bang Boom Cake, was full of guest appearances and garnered a heap of critical praise. Skeletons is the first time Tiny Masters have really stretched out on their own and, curiously, they sound a lot better without all the celebrity involvement of their previous record.»

rough trade exclusive poster free with the album, taken whilst the band visited the rte photo booth. brooklyn ny's tiny masters of today release their second album 'skeletons' on mute. with 'skeletons', the tiny masters went it totally alone, producing and writing the entire album themselves. the tracks were largely recorded at their home in brooklyn, using the computer program garage band. they brought the songs to seaside lounge studio with engineer patrick mccarthy for additional recording and the final product was mixed by matt stein at u.w.m.s.c. in new york. so what does this new album sound like? fans of the familiar shouting and sloganeering and general anti-establishment nose thumbing won't be disappointed but the sonic palette has broadened somewhat. while their rag-tag sound is clearly informed by classic-era punk rock, they think nothing of incorporating hip-hop, electronica, dub, and even disco into a messy and uproarious concoction. the end result is frantic and funny, equally poignant and pugnacious. politically charged and strikingly original, a curious pastiche of styles and subjects all channeled through their own, very unique, filter. tiny masters of today are siblings ivan and ada (ages 15 and 13 respectively) and drummer jackson pollis. 'skeletons' follows their debut album 'bang bang boom cake'.
description from www.roughtrade.com