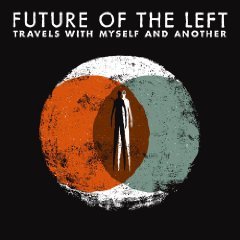 Future Of The Left - Travels With Myself And Another

It’s all about control for Andy Falkous. Rage is the driving force behind his music, and as leader of Future Of The Left and mclus»

produced by richard jackson, who also worked on 'curses', 'travels with myself and another' features recent single 'the hope that house built' with its marching queens of the stone age-style riff and 'drink nike', which was debuted on their uk tour last year and which also featured on the live album 'last night i saved her from vampires'. lead-off track 'arming eritrea' sets the tone for the album. it lulls the listener into a false sense of security before exploding through the speakers with a bloodthirsty roar of fuzzy bass and distorted guitar lines. the album's centrepiece, the synth-heavy 'you need satan more than he needs you', finds future of the left at their savage best, as keyboards bounce off hypnotic drumming and funky bass-lines to create a devilish masterpiece that looks set to captivate fans and newcomers alike. on 4ad.
description from www.roughtrade.com