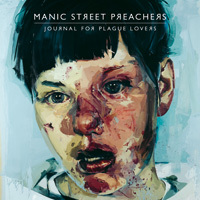 It isn't so much a revitalised Manic Street Preachers here, but something more akin to a rebirth, such is the vehemently passionate stance all three of the band have seemingly taken on themselves to deliver with this record. »

manic street preachers return with their ninth studio album, 'journal for plague lovers'. the album follows the hugely successful and critically acclaimed 2007 release 'send away the tigers', and the induction of the band into the nme's hall of fame with their naming as the 'nme godlike genius' for 2008. produced by steve albini and recorded live at rockfield studios in wales during the winter of 2008, the album features lyrics left behind by former guitarist richey edwards across all 13 new tracks. an original piece of jenny saville's art is the cover of journal for plague lovers, whose painting graced the cover of 1994's 'the holy bible'. musically the band draw on their classic 'holy bible' sound with elements of nirvana's 'in utero', as well as a delicate, beautiful acoustic side.