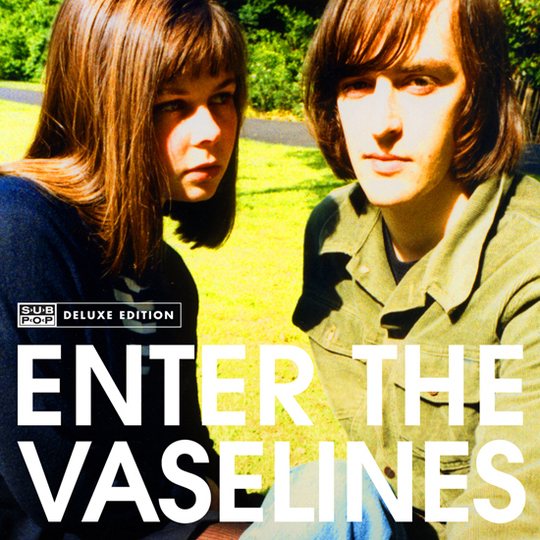 To write one song that gets covered by Nirvana may be regarded as good fortune; to write three looks like genius. Having 'Molly's Lips', 'Son of a Gun' and 'Jesus Wants Me For A Sunbeam' all included on albums by the then-biggest band in the world (the first two on Incesticide, the latter on MTV Unplugged) has certainly kept the prospect of wage-slavery from Eugene Kelly and Frances McKee's doors. "It's classic Vaselines that we became famous through someone else covering our songs" says McKee in the liner notes to this new compendium of the band's oeuvre. "How great for slackers like us to get another band to do all the hard work."

Originally a two-piece, the Vaselines emerged from the thriving Glasgow scene of the 1980s that had already spawned Primal Scream and the Pastels. In fact it was Stephen McRobbie of the latter band who signed them and got them into the studio to record their first EP, Son of a Gun. The title track stands as one of their greatest moments, the distorted guitar growl of its intro breaking into a scrappy, stomping cloudburst of one-note piano, spindly guitar and drums, this indie wet dream topped off with Kelly and McKee's laid back to-and-fro vocal. Their deadpan delivery and the idiotic simplicity of the beat only add to the sublime uplift of the song's chorus. Just try not hitting repeat when it ends.

The band's second EP, Dying For It, saw the line-up expand to include Eugene's brother Charles on drums and James Seenan on bass. While it doesn't include anything as unexpected as the first EP's angular, semi-electro cover of Divine's Hi-NRG smut-a-thon 'You Think You're A Man' (which should be required listening for all indie bands who've recently decided to 'go synth'), it's still diverse for a four-song collection. The undoubted highlights are the brief, gorgeous tumble of 'Molly's Lips' and the Vaselines' undisputed high point, 'Jesus Wants Me For A Sunbeam'. The descending major-to-minor progression of the viola, the muted drums, the harmonies on the 'Don’t expect me to lie/Don’t expect me to cry...' chorus and the strummed simplicity of the guitar part all combine to form a perfect pop song that's as exhilaratingly catchy as it is richly melancholic. Kelly wishes they’d written more than one verse, but the ceremonial air of the repeated refrain is very much part of its power.

It's enough to make you wish that the Vaselines had bothered being serious more often. But while the bulging double entendre of songs like 'Rory Ride Me Raw', 'Monsterpussy' or the sacrilegious sniggering of 'Sex Sux (Amen)' aren’t up to much (and clearly bear the hallmarks of their writers being not long out of single sex schooling, although the title of this collection suggest they've still got a yen for filth), there's plenty on the band's debut and only album (thus far, at least – they’ve recently reformed and new material has already been written) that has clearly stood the test of time.

The off-key lament of 'No Hope' and the bluesy revisiting of 'Dying For It' are highlights, but 'Dum Dum' is really an album that works best when played all the way through. Not because it's of a piece, or that one song informs another, but for the sheer joy of letting one memorable hook pile into another for half an hour or so. The influence of early Jesus and Mary Chain, the Pastels and above all the Velvet Underground are clearly discernible throughout, but each song bears the unique stamp of Kelly and McKee's partnership: slyly humorous, lo-fi, scrappily off-key and endlessly catchy, they tick off every box in the 1980s indie playbook without ever sounding like they're trying to.

Anyone who owns the 1992 Sub Pop compilation The Way of the Vaselines might be thinking there's nothing for them here, but beyond the re-mastering adding significant depth to Dum Dum (the difference it's made to the EPs is negligible to my admittedly rather damaged ears) there's also a second disc of previously unreleased material. The three demos included here make Wavves sound like Dolby 5.1 and prove that 'Son of a Gun' would still sound incredible if sung into a broken Dictaphone that's been dropped into a busy public toilet with a broken flush. 'Red Poppy' is gorgeous, too, the muffled, sub-aquatic quality of the audio only adding to the song's plangent theme of plangent longing.

Of the two concerts included the 1986 show from Bristol sounds like a bootleg of a bootleg of a bootleg, but is valuable as a document of how their shows sounded when Kelly and McKee were a two-piece playing along to a backing tape. The Fulham Greyhound gig from 1988 sounds much sharper and captures the band sounding feisty, amused, and gloriously, shambolically tuneful. Just like the Vaselines, in other words.