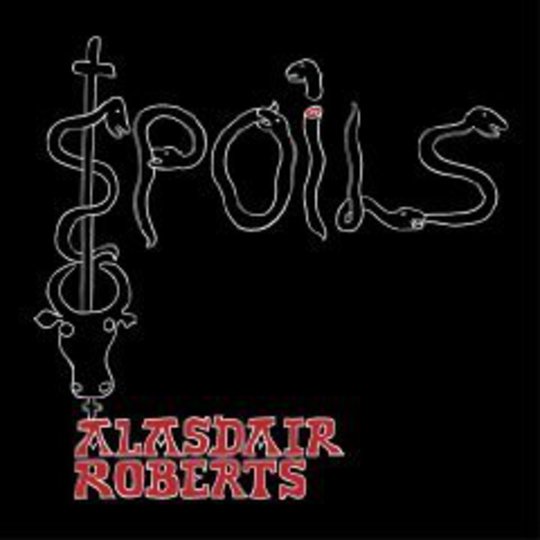 Almost a decade ago, Alasdair Roberts made an incomparably weird record called The Night Is Advancing with his old band Appendix Out. Incomparable for the times that is – but a good stab at updating The Incredible String Band’s psychedelic folk with synths and drum-machines. Maybe there was a bit of Can in there, too. Around that time, Ali also helped Jason Molina soundtrack the classic dark nights of the soul that are The Lioness and Ghost Tropic by Songs:Ohia, so the hope was that he’d continue on a similarly dark path. Mysteriously, Ali then went solo and started re-interpreting Scottish folk ballads with minimal backing and the emphasis on surreal and ribald humour: one enduring image was the hanged laird dying with a raging erection in his trousers. No wonder Ali was one of Will Oldham’s protégés...

At last, Spoils recaptures that earlier weirdness, and the sense of being a bard from an alternative past, if not presiding over their unfathomable, Gormenghastian rituals. ‘Unyoked Oxen Turn’ is the most straightforward thing here, musically and lyrically, with its tale of a cripple running about the world in search of his legs, the advice he receives on the way, and the final punchline that what he really should have been looking for was... well, you’ll see. Simple though it is, the interpretation remains open, so you won’t groan at it, but the enjoyment’s frownsomely laced with the awareness of an entire world and its network of meanings that may have been lost... and that’s also right there under the language you thought you knew.

You could say the same of all the other tracks, where the music also happens to be richer in detail. Whether it’s the (Norse) souls of the dead sailing on a ship made of fingernails, or (Edward Lear’s) Jumblies setting to sea in their sieve, the surreal always has a resonance that the plainly symbolic may not, and Ali’s got a good sense of how to balance the timelessly-evocative with those images that root a song in a time. This is as true of the musical motifs and arrangements, as it is of the lyrics: ‘Hazel Forks’ initially uses a roundel that’s a little dull to listen to, coming from a time when music didn’t have to be as dramatic, because it was always social, and interactive... but then a solo on phased guitar introduces a more colourful movement. The song turns out to be another weirdly plotted quest narrative (named for the fact the heroes set off with dowsing rods), and the verses catalogue various strange occurrences, leading up to the courtship in the penultimate act:

“here’s the gift of the infant suitor / a cask of ash and a flask of pewter / a map of the cities of the future”
“here’s the dowry of the leper / a walnut shell and a peck of pepper.”

At the end, the suitors turn out to be hazel twigs in a bush where a songthrush is singing, and the “tangling” of the branches suggests them surrounding her and trying to win her heart. Maybe. In any case – if you thought the pre-literate world was dull, well, it may be hard to convey now, but people were forced to think in far more complex analogies to figure out how it all fit together.

There are plenty of fine moments in all the songs, whether it's a sudden burst of harmonies, or unexpected instrumental flourishes, from behind the singer. The best here may be ‘The Flying of Grief & Joy’ (track 1) with its own quest narrative, and the (inevitable) loss of members from the party as they proceed, hence the refrain “the Devil take the hindmost” after each verse. Flinging in references to Mithras, Buddha, and Allah, as well as an odd assortment of instruments, Ali obliquely reminds us that this is what “authentic” folk music does – it isn’t purist or fundamentalist; it just uses what comes to hand, because history isn’t linear so long as you can summon the past in song. You don’t need to get the references, or understand the finer points of a song like ‘Ned Ludd’s Rant (For a World Rebarbarised)’ to get the sense that the past isn’t dead yet, and all ages are contemporaneous in the mind. Overall, this is one to file alongside Joanna Newsom (especially The Ys Street Band EP), not just for strangeness, but for the ambition to create worlds.