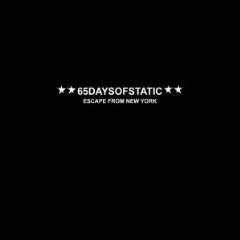 Whatever your opinions on 65daysofstatic, there’s surely something at least mildly smirk-worthy about their releasing an album rec»

the last few years 65daysofstatic have played over 10million shows around the world. their blend of glitchy dance music and deafening, soaring guitars has left thousands of converts in their wake. three albums in, and 65daysofstatic are currently locked away in sheffield battling with the writing for their fourth album. last year, most of their time was taken up supporting the cure on their world tour. rolling up to arenas and blasting their confusing noise at shows full of unsuspecting cure fans, was an immensely satisfying experience. for a long time they suspected that just because they don't have any singing and sometimes play in weird time signatures, their music shouldn't be consigned exclusively to bedrooms and club shows to the passionate few. it bounces around in stadiums nicely too. the world tour came to an end with two shows in new york city, at 2 of the most prestigious venues the us has to offer - madison square garden and radio city music hall. both shows were recorded and the result is the bands first live album. a 45 minute rush of tinnitus, contrary techno, fragile guitars, anti-social drum'n'bass in 7/4 and, if you listen carefully, the sound of 20,000 people finding rooms in their heads they never knew were there. the dvd accompanying this release is '65doc' a road movie, captured by 65 conspirator caspar newbolt, over the course of the north american leg of the tour. seven weeks of 65's cure support shows, interweaved with their own headline shows, in the alternative/punk clubs, playing to the cute indie kids who came out to see them. gasp at the audacity of a band so inarticulate they have to be subtitled! laugh at the blind naivety of a band who have been on the road long enough to believe, that they are doing something that hasn't been done a thousand times before! dance to the spectacle of 65daysofstatic twisting the cure's lighting rig into spasms of strobe and confusion! this release captures 65daysofstatic at a crossroads. with the last album behind them and their heads filling up with ideas, 65days move ever onwards. this is not just a sedge-way release. they have always shined their brightest as a live band and these recordings are the closest they have come so far to capturing that spark.