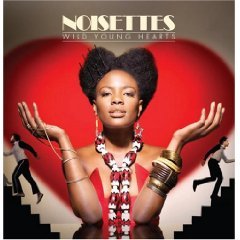 two years on from a debut album awash with punk spirit and scorching blues-rock, london trio noisettes make their return with 'wild young hearts', a set of sleek pop songs steeped in soul, dizzy on disco and harking back to the days of blues and jazz greats. from the galloping funk grooves of first single 'don't upset the rhythm', to the joyous, jazzy title track, the stomping electro-rock of 'saturday night', the glorious '60s-tinged soul of 'never forget you' and the sultry, shimmering pop of '24 hours', in 'wild young hearts', noisettes have made what is set to be one of 2009's most adventurous albums. never fond of a formula, the trio always intended a radical musical detour from their acclaimed debut, 'what's the time mr wolf?', an album that spawned five singles and took them on tour for over a year, sharing arena stages with muse and criss-crossing the states with tv on the radio and bloc party. if you can imagine a hybrid of blondie, ting tings and rihanna, you'll begin to get an idea of how special this new record is. vocalist shingai shoniwa, meanwhile, is fast becoming a style icon with the makings of a modern-day deborah harry.