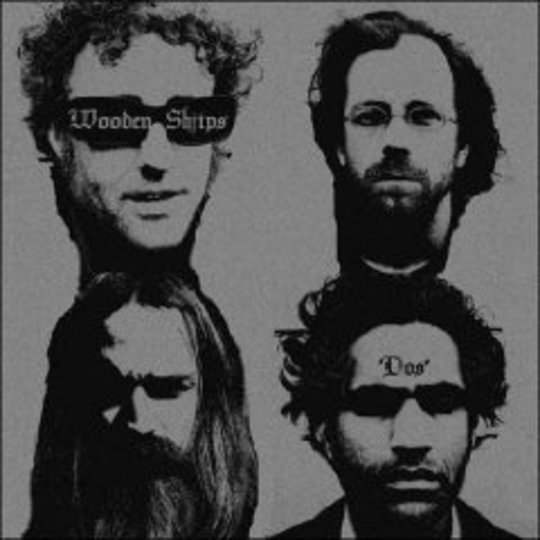 You can’t teach an old dog new tricks, goes the saying. But, on the evidence of Wooden Shjips' second effort Dos, you can certainly get four relatively new dogs to master some very old tricks.

Dos is in fact, not very different to 2007’s self-titled, sunbaked and acid-fried self-titled LP. This lack of ‘progression’ seems to have irked many onlookers and critics, but to be honest, I find the very idea of progression from a band who are so retrospective in their outlook and output mildly ridiculous. As their roots spring from the Seventies pyschedelic scenes of both their native California and the communes of Germany from whence Krautrock sprang, should they have moved through the decades and given their second album an Eighties influence? Maybe a post-punk record might have been in order? Or a hair metal one?

Thankfully, Wooden Shjips have entertained no such ideas, and have stuck resoundingly to what they do best: wailing guitars, driving motorik beats, delayed vocals and woozy organ tones dominate this album, just as they do the entirety of the band’s back catalog. Opener ‘Motorbike’ might just be the best display of their craft yet, throbbing into life with a wash of overdriven guitar, before the telltale kraut stomp of the drums kickstarts affairs. It’s a five minute ode to the easy rider mentality, swaggering and burning its way down a desert highway as singer Erik Johnson mumbles something about motorbikes and "getting out at night". ‘For So Long’ follows in fashion, burning its way out over four minutes of lumbering low end rumble, as Erik puts on his best Jim Morrison mask and intones deeply about something hot on his legs (I presume this is a spiritual reference beyond my understanding) and coaxes wails and shrieks from his guitar.

It’s at this point that you start to wonder exactly how patient the bassist must be: he seems to play a maximum of five notes, repeated ad infinitum, for the duration of each song. The drumwork is similarly unfussy with no dallying into fills or breakdown, illuminating a band completely obsessed with the purity of their own groove. There’s a noticeable urgency this time around but their sound is still a world away from that of, say, Oneida, whose phrases drive ever harder, faster and more intensely towards a conclusion of sorts. Instead it bears more comparisons with heavy dub, locking into a monotonous yet liquid groove, relentlessly keeping time and allowing the other players space to wander mindlessly. To carry this out over an entire song is impressive, but to maintain over an entire album has the effect of near hypnosis. This approach to rhythm is exemplified by ‘Down By The Sea’, which builds to a storm of echo and wash over ten minutes, anchored by a rocksteady bassline and tirelessly pulsing drums.

End track ‘Fallin’’ is the only disappointment, eschewing the heavy motorik of its peers and opting for a cleaner, more organ-led sound. It seems to overstay its welcome by a good two to three minutes, which doesn’t help matters, and definitely proves that the Shjips are at their best when keeping their meanderings within a degree of concision, rather than letting their freak flag fly a little too high and get carried off downstream. Nonetheless, Dos is a surprisingly enjoyable record, taking the band’s previous work and tweaking it just enough to give the impression of vitality. It’s a swaggering, pyschedelic road album, which we’ve generously been allowed to ride shotgun on. Buy the record, take the ride.