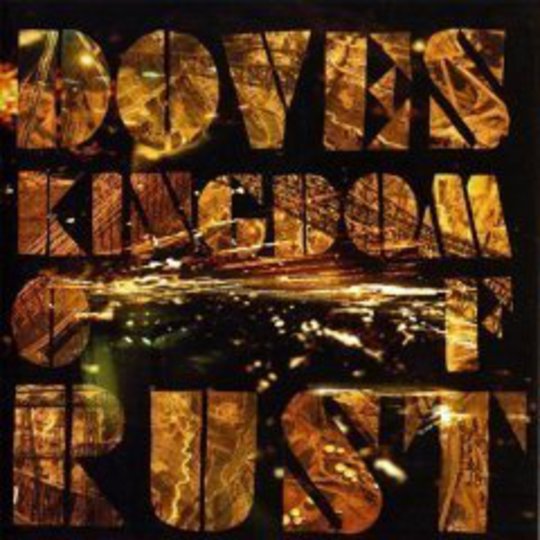 Doves have always felt a little like Elbow's extrovert alter ego; a band happier being at the heart of the maelstrom than contemplating its hung-over afterglow. Whereas Elbow can be characterised by their cap-in-hand romanticism, Doves have always been better suited to the role of escapists. For Elbow's unabashed honesty, Doves respond in kind with vistas of widescreen imagery. While neither band would claim to represent Madchester's new dawn, both are true products of the city: equal parts self-effacing and brazen.

For Kingdom Of Rust, Doves have spent a great deal of time (four years, in fact) holed up in training. As they confidently re-enter the ring as strutting light-heavyweights, they will be keen to dispel any accusations of ring rustiness. In many ways, Kingdom Of Rust feels like Doves might be trying to prove a point. The Last Broadcast and Some Cities were both strong albums, challenging enough to be interesting over the long term and speckled with stellar pop songs. Kingdom Of Rust focuses less on the charts and more on the reinvention of Doves. After four years in which Elbow have supplanted Doves as Manchester's favourite son, Kingdom Of Rust is an album with its chest protruded proudly. Clearly, Doves have no intention of quietly disappearing into Manchester's mottled ether quite yet.

Perhaps reinvention is too strong a term; but there can be no doubt that Kingdom Of Rust is leaner and more pumped up than previous efforts. People who have recently grown into Doves may have trouble acclimatising to the new album. Its layering is arguably more indulgent, its melodies are subtle and the whole thing seems less benign than its more immediately satisfying predecessors. If anything, Kingdom of Rust's sweet spots are harder to discern. It's pretty clear that Doves have spent the extra time working hard to reward their audience in a new way. Like true Mancunians, they make you wait four years and then they have the temerity to ask that you to commit to repeat listens.

Of some comfort will be Kingdom Of Rust's reliance on larger-than-life subject matter. Like previous albums, it is quite happy tackling life's extremities, with song titles speaking of jetstreams, kingdoms, lifelines and being spellbound. And as inane as the idea of singing about a jetstream would appear to be, it doesn't prevent Doves from creating a barnstorming album opener, replete with inspired-by-Chemical Brothers electro meddling, swooping flange attacks and a steady crescendo that constantly reignites like it were conceived on the shores of Cape Canaveral. 'The Outsiders' bears all the bristling angst of BRMC's 'Whatever Happened To My Rock And Roll' and '10:03's monstrous middle riff - lifted straight out of John Squire's Led Zep copy book - pounds itself through floorboards, indiscriminately. 'The Greatest Denier' is, put simply, a four-minute shot of something massively potent.

Doves are able to counter this widespread hysteria with beautifully measured moments such as the album's title track. Kingdom Of Rust's quiet highlight features brushstrokes, xylophones, strings and an illustration of Doves' comfortable grasp of pathos: "Blackbirds flew in and to the cooling towers / I'll pack my bags / thinking of one of those hours with you / waiting for you". Aside from the occasional contemplative lull, this record prefers to spend its time drifting in and out of a dreamy state of schizophrenia, with few pauses for breath.

'Compulsion' is easily the album's biggest surprise. It may have taken four albums and countless years but here is a Doves track you can legitimately shake your hips too. Borrowing heavily from Blondie's 'Rapture', its knowingly hip, libidinous baseline and lashings of reverb effects create something of a nympho-infested oasis amid the rest of the album's urban landscape of skyscrapers and football stadiums.

With the lyrics and song meanings often totally shrouded by a dense nebula of sound, you are often left to simply swoon over Kingdom Of Rust's beautiful and frequently electrifying chord progressions. Its blanketing melodies and unrelenting energy will hit you first, but then that has always separated them from their mates in Bury. Although Elbow are able to put far greater emphasis on Guy Garvey's angelic vocal talents, Doves are fully aware of their strengths and so is Kingdom Of Rust. Even if the album loses its way with its final two tracks, you are left so exhausted by this stage that it almost comes with a sense of relief. By reinventing what they do best, Doves have fearlessly strutted back onto everyone's radar.