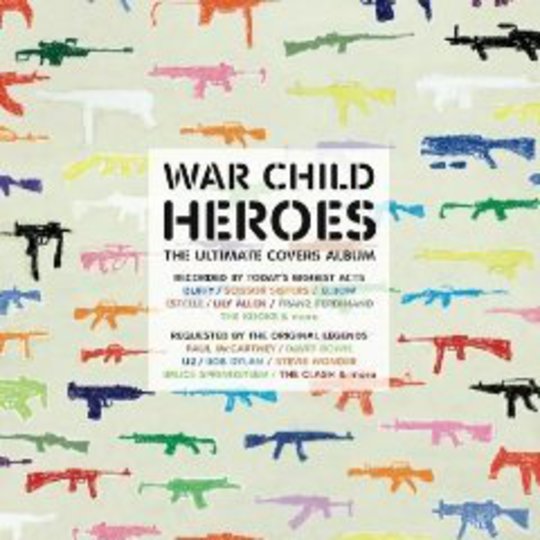 It’s a commonly held belief that you can’t criticise a charity record. The phrase "but it’s for a good cause" is often used as a defence against a half thought out album compiled with little care for the listener, leaving said punter out of pocket and with eleven more tracks to skip on their Ipod. 2009 has seen the bar well and truly set with the release of Dark Was The Night, the album curated by The National in aid of the Red Hot Organisation, featuring Feist, Ben Gibbard, Arcade Fire, David Byrne and Sufjan Stevens amongst many others.

Heroes is not, nor is it trying to be, as credible as Dark Was The Night but nevertheless it does have some Drowned In Sound friendly names involved. The basic premise is that an established act picks their favourite current band to cover one of their old tracks, hence the name ‘Heroes’. This sees the likes of The Clash, David Bowie, The Ramones and Bob Dylan rubbing shoulders with TV On The Radio, The Hold Steady, Beck and Hot Chip.

TV on the Radio’s version of ‘Heroes’ by David Bowie is as impressive as you would imagine; Tunde Adebimpe’s vocals encapsulate the spirit of Bowie but retain the distinct and idiosyncratic TVOTR sound. A typically spacey and expansive production job from Dave Sitek adds to an already impressive job. Similarly notable is Hot Chip’s take on ‘Transmission’ by Joy Division. They take the morose classic and turn it into a typically asymmetrical and woozy electro pop ditty, most notable for how Alexei Taylor’s angelic vocals are juxtaposed against himself with his voice streamed through a vocoder at various points on the record. It’s an effective method and you wouldn’t be surprised to hear it used on the next Hot Chip album. ‘Transmission’ is the track least faithful to the original recording on this compilation, and the most innovative with it. Elsewhere, on the positive side Lily Allen turns The Clash’s ‘Straight To Hell’ into a stoner lullaby nicely accompanied by Mick Jones on backing vocals whilst Beck turns in an exemplary version of Bob Dylan’s ‘Leopard-Skin Pil-Box Hat’.

Obviously The Kooks covering ‘Victoria’ by The Kinks is as teeth grindingly Radio 1 Live Lounge as you would expect and Estelle’s version of the Stevie Wonder favourite ‘Superstition’ is as karaoke as it comes. The same can be said for The Hold Steady covering Bruce Springsteen. Rumours that the organisers chose ‘Atlantic City’ over Gene’s version of a Smiths song are as yet unconfirmed. As the album ends with disco floor fillers by The Ramones and Blondie by way of Yeah Yeah Yeah’s and Franz Ferdinand respectively, you know you have had a fun if not entirely unforgettable experience.

Overall, while War Child: Heroes may lack the credibility and tunes of ‘Dark Was The Night’, don't forget it is all for a good cause.